Giller Prize nominee Gary Barwin on listening to the parrot 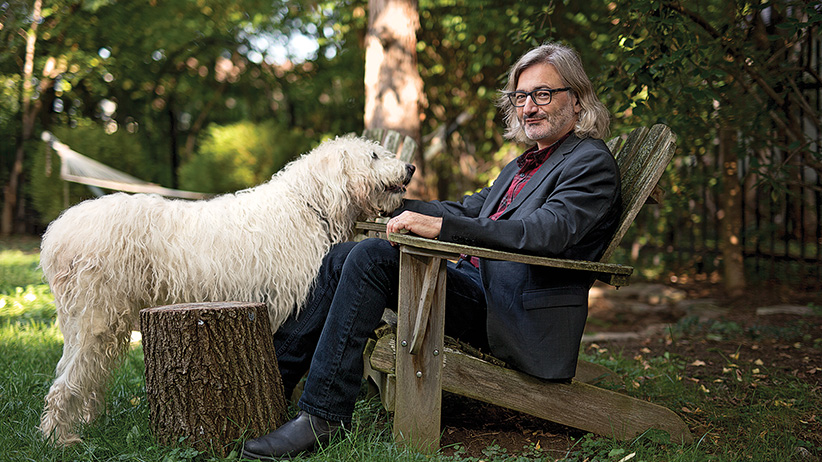 Gary Barwin’s fourth novel is his first to be shortlisted for the Scotiabank Giller Prize. (Photograph by Jennifer Roberts)

The 2016 Scotiabank Giller Prize: Canada’s most distinguished literary prize awards $100,000 annually to the best Canadian novel or short-story collection published in English. In this series, Maclean’s highlights the artistic process of the six nominees. Here, Gary Barwin, author of Yiddish for Pirates, discusses the joys of “lexiconjury”—going where the writing leads. Read more from other Giller Prize nominees here.

Canada has its share, and perhaps more than its share, of distinguished writers of whom you have never heard. So much so, that Hamilton’s Gary Barwin, 54 years old and author or editor of 19 previous books, could be a 2016 member of Random House Canada’s New Face of Fiction series. In the event, Barwin turned out to be an “overnight” success: his novel, Yiddish for Pirates, is shortlisted for the Scotiabank Giller Prize and the Governor General’s Literary Awards.

To listen to Barwin, it’s all the fault of the bird, the 500-year-old multilingual African grey parrot who sits on the shoulder of Barwin’s narrator, Moishe, like “a GoPro camera,” recording everything and commentating on it from a Yiddish perspective. That’s Moishe’s native tongue, but not a language his creator speaks. “Like a lot of Jews, I have a feel for Yiddish,” Barwin says, “for the attitude, the way of looking at the world, that it expresses, but very limited knowledge of it.”

It’s also a language that makes Moishe—who begins Yiddish for Pirates as a 14-year-old Jewish boy from Lithuania seeking a sailor’s adventures in the days of Columbus—an outsider’s outsider, even among the Ladino-speaking Spanish Jews he encounters. The outsiders’ perspectives pile up by the time Moishe arrives in the New World, notes Barwin, becoming part of “a Jew’s-bird’s-eye view of a different genocide—there are so many connections over time.”

MORE: Read an excerpt of Yiddish for Pirates here

BY GARY BARWIN · I’m 13 and practice saxophone late nights in the loading bay of the local mall trying to be the Jewish John Coltrane. It sounds so good in there it reminds me of Paul Horn playing flute inside the Great Pyramid. I play one note and then another. I have the sense of opening up an entire world of feeling and experience. Each different combination, an entirely different graduation of emotion, a finely tuned way of considering the world. The whole history of what those two notes have done, where they have been, and what they might be able to do. An encyclopedia but also a vast source of potential energy. I’m just some suburban teen out after dark but I feel like I have cilia, tentacles and antennae.

I play one note and then another, wondering where I’ll end up. And then the police show up—this couldn’t be just what it seems.

Like music, I see language as a library collecting all the ways that people have used its elements—its words, grammar, tropes, and stories. And just by being a language user, I have access to its edgeless storehouse of memory and its technology of possibility. A telescope, a microscope, a deck of tarot cards, a 22-dimensional rocket ship. I feel that I’m able to go many more places and with greater insight than if I just relied on my own imagination.

For me, writing isn’t about dreaming up a fixed idea of things ahead of time but (as I say to my writing students) about understanding that “the writing knows more than we do” and letting it lead you. I feel that allowing the writing to guide me takes me into far richer spaces than if I just sat down thinking I already knew everything. To quote the poet Steve Venright, it’s all “lexiconjury,” pulling surprises out of the dark of a hat. Of course, some of the things that come out have preoccupied you in deep ways, whether you knew it or not. And sometimes, the writing is duplicitous and trickster-like—makes you consider if you actually mean what you want to say.

So a story told by a 500-year-old pirate’s parrot? I thought it’d be fun to write about Jewish pirates, and the parrot seemed like the obvious narrator. It watches from the pirate’s shoulder like a GoPro camera. And parrots are themselves libraries of language. They listen and learn from those around them. And because this particular parrot learned Yiddish, it guided me with quintessentially Jewish fatalistic yet celebratory humour and irony.

I didn’t exactly decide what to write. I just had to be true to the voice of the parrot as it led me on this adventure, exploring along the way history, the persecution of Jews and Indigenous people, what it is to be “the other” and what should one do in the face of violence, hope, love, sex, possible immortality and bad jokes. I feel that in whatever measure the novel expresses compassion, wit, understanding and insight, I can say it wasn’t me; it doesn’t feel like it was me. It was the bird. It’s his fault.