As it was for Belshazzar, the writing’s on the wall. Some don’t seem to be paying attention. 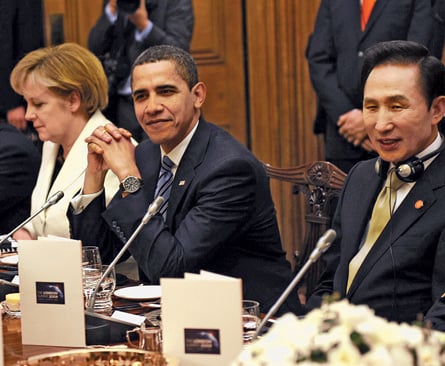 If you know your P. G. Wodehouse, you’ll remember the passage in Right Ho, Jeeves in which Tom Travers is much preoccupied by the Exchequer’s claim upon him:

“Is he still upset about that income-tax money?” asks his nephew, Bertie Wooster.

“Upset is right,” replies Aunt Dahlia. “He says that Civilisation is in the melting-pot and that all thinking men can read the writing on the wall.”

“Oh, that, yes,” says Bertie. “I’ve often wondered how that gag was worked. With mirrors, I expect.”

A lot of writing on the wall these days. A half-remembered quatrain from Jonathan Swift has been dancing around my brain in recent weeks:

From his own hand foresees his fall,

They have his soul, who have his bonds;

Indeed, ’tis. The very title of Swift’s poem, “The Run Upon the Bankers,” seems very archaic three centuries on. We don’t have “runs” on banks anymore. Instead, U.S. and European governments intervene to “save” them—whether they want to be saved or not. Back during the presidential primary campaign, there was one of those cringe-making questions about what the candidates considered their greatest weakness—to which the oleaginous John Edwards gave the even more cringe-making answer that his greatest weakness was that he was too passionate about helping poor people. And a couple of days later Barack Obama drolly observed that, if he’d known that was the kind of answer you were supposed to give, he’d have said his greatest weakness was that he wanted to help old ladies across the street, but that not all old ladies wanted to cross the street.

But that was then, and this is now. Now he prowls Wall Street, yanking old ladies across from the sunny side to walk in the shade with their blues on parade. Stuart Varney recounted the tale of an American bank forced against its will to accept government money from TARP (the “Toxic Asset Relief Program”) last fall under threat of a public audit. So it got dragged across the street. Recently, it tried to repay the money (with interest), only to be told by the government that they won’t accept it and, if the chairman persists, there will be “adverse” consequences. As Mr. Varney put it in the Wall Street Journal, the bank boss “sees the writing on the wall and he wants out.”

The “writing on the wall” is not the run on the bank feared by Swift’s banker but something worse: the annexation of the private sector by an all-controlling statism. Wall-wise, that’s the most immediate writing up there, the opening sentence, as it were. The image comes from the Book of Daniel, when Babylon’s king throws a wild party and, in the midst of his drunkenness, toasts the gods of gold, silver and various other commodities. No sooner has he done so than the gag with mirrors (as Bertie Wooster has it) appears on his plaster, spelling out with disembodied fingers the currency units “mene mene, tekel, upharsin,” and none of the seers Belshazzar keeps on the payroll has a clue what it portends.

Now the writing on the wall is back in fashion. In Banquo’s Ghosts, the new thriller by Rich Lowry and Keith Korman, it springs unbidden into the dreams of an unlikely undercover agent in Iran:

“He imagined he knew what Belshazzar must have felt when those words appeared on the wall during his feast, damning his worship of false gods:

“He wrapped his arms around his queasy belly and sat buffeted in the night, the recesses of his mind calling up somehow that in Aramaic parsin had been a pun on Persian.”

It had. After all his A-list wise men have failed to divine the meaning on the masonry, the King calls Daniel the Jew to explain things, which Daniel does, very bluntly:

Mene: “God hath numbered thy kingdom, and finished it.”

Tekel: “Thou art weighed in the balances, and art found wanting.”

Upharsin: “Thy kingdom is divided, and given to the Medes and Persians.”

Within 24 hours, Belshazzar is slain and Darius the Mede is king. In Banquo’s Ghosts, it’s the West that hath been weighed in the balances and found wanting, and the Persian pun refers to the nuclear mullahs’ plans to advance the finishing of the Great Satan. That’s Meaning No. 2: the geopolitical writing on the wall. As the Iranian scientist crows to the pitiful American: “We are close to taking our place in the sun”—and you can’t stop us. His once sonorous platitudes ringing ever tinnier, President Obama was still traipsing from one Euroschmooze to the next—G20, NATO, EU—when the North Koreans lobbed their latest rocket over Japan, a “provocative” (in diplo-speak) act to which the Hopeychanger-in-Chief responded with a plea for “a world without nuclear weapons.”

Oh, phooey. North Korea is assisting the Iranians with their delivery systems, and the Iranians are promising to share their nukes with Sudan. Far from “a world without nuclear weapons,” we face the prospect of a world in which some of the wealthiest societies in history, from Canada to Norway to New Zealand, are incapable of defending their borders, while impoverished Third World basket cases, from North Korea to Sudan, go nuclear.

A day after reading that passage in Banquo’s Ghosts, I encountered yet more writing on the wall. René Servoise, France’s former ambassador to Indonesia, issued a wake-up call to his somnolent compatriots about “la stagnation démographique”—that’s French for “hang on, isn’t that the crazy Steyn thesis that got those hate-mongers at Maclean’s hauled up last year before three of Canada’s many fine human rights commissions?” Why, yes, it is. Ambassador Servoise was attempting to contrast the “demographic stagnation” of the French with the resurgence of Islam:

“Warning. If native Frenchmen fail to be the most numerous, we will see that our days are numbered. If we fail to limit the number of immigrants, we will be judged as wanting in the scales of History. If we fail to affirm our national ambition, we will set the stage for the bursting apart of our nation.

“Remember. One day, in Babylon, on the wall of his palace, Belshazzar saw letters written in fire . . .

“For us today the warnings come daily on our TV screens. But no prophet dares translate them.”

Let us put aside the question of Islam, if only to ward off the “human rights” commissars for another week or two. The demographic question is the third and most important “writing on the wall.” Germany’s chancellor, Angela Merkel, became one of the first Western leaders to raise the subject publicly, in the course of objecting to the Obama administration’s demand that its allies follow Washington down the path of massive spending and a ballooning national debt.

“Over the next decade,” Frau Merkel pointed out, “we will undergo a massive demographic change, and, therefore, borrowing is a greater burden for the future than in a country with a much more continuously growing population, as in the United States of America.”

Translation: America can rack up multi-trillion-dollar deficits and stick it to its kids and grandkids. But in Europe there are no kids and grandkids to stick it to—just upside- down family trees: in Germany, Spain and Italy, four grandparents have two children have one grandchild. The Financial Times noted last week that the demographic death spiral is a far greater threat to fiscal solvency than the present economic downturn. And yet, despite Germany, Japan and Russia already being in net population decline, the G20 had not a word to say about it.

The sums are bigger than in King Belshazzar’s day: mina mina, shekel, half-mina. Now it’s trillion trillion, billion, half-trillion. But throughout the advanced social democracies the upshot’s the same: demographically, the days of the kingdom are numbered; fiscally, we’ve been weighed in the balances and found wanting; and geopolitically, the Persians and others (no sign of any Medes) are beginning to divide up what’s still supposed to be a “unipolar” world.

Bertie’s Aunt Dahlia is right: once upon a time, you were certainly an ass if you didn’t know where “the writing on the wall” came from. It was part of the accumulated cultural inheritance: Handel and William Walton wrote oratorios about it. It was routinely alluded to, hither and yon: “No more his eager call / The writing’s on the wall,” as Judy Garland sang in A Star Is Born, music by Harold Arlen, lyrics by Wodehouse’s pal Ira Gershwin. Rembrandt’s painting of Belshazzar’s Feast hangs in the National Gallery in a London all but oblivious to its significance, not least in G20 week. Today, I doubt one in a thousand Canadian high-schoolers would have a clue whence the expression derives. And one sign that the writing’s on the wall is when society no longer knows what “the writing on the wall” means.