Gord Downie wasn't just a rock star—he was a real poet, too

Downie's lyrics leapt out of radio playlists 'because his use of language was so evocative, so rich with meaning and allusion' 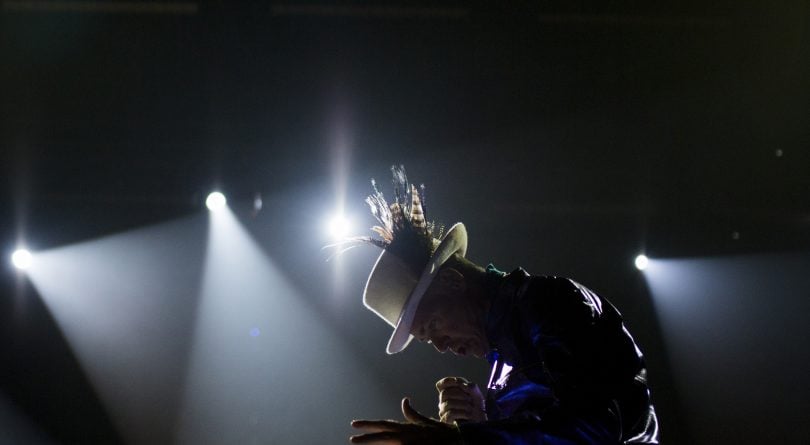 While telling the story of Gord Downie and The Tragically Hip in his new book, The Never-Ending Present, author Michael Barclay also looks at the social and cultural influences that shaped the quintessentially Canadian band and its singer, who died of brain cancer in October 2017. An excerpt:

Coke Machine Glow, Gord Downie’s first solo album, confounded many people when it came out in 2001. That the singer in the Tragically Hip had put out a solo record was newsworthy enough. That he simultaneously released a book of poetry, with the same title and cover design, was something else entirely. For the first two weeks both were on sale, they were available only as a bundle—and they sold 10,000 copies in 36 hours. When they were put on sale separately, the book sold another 10,000 copies, a total that exceeded sales for Michael Ondaatje’s then most recent collection, 1998’s Handwriting. Poets were feeling particularly sensitive to this news: it had been only three years since pop star Jewel released her first and only book of poetry, which was also a bestseller, despite scathing reviews.

What was this big rock star doing slumming with literary company equally revered and reviled, in the least commercial literary medium possible? What does a songwriter know about poetry? Isn’t it a completely different medium? Didn’t Jim Morrison ruin this for everyone?

But Gord Downie was hardly a pariah among poets. Coke Machine Glow came out the same year as the inaugural Griffin Poetry Prize, one of the richest literary awards in the world, presented every year to one Canadian and one international poet. Downie performed at the first gala. But his book was not nominated—that would have been quite a coup, for a writer’s first book to take a place beside Anne Carson and Don McKay on a shortlist. To that crowd, Downie’s work may have been a curiosity at best. A rock star with a poetry book? Yeah, right—why don’t we just give Bob Dylan the Nobel Prize for Literature. Oh, wait . . .

Two young Canadian poets, one in Ottawa and one in Toronto, were talking on the phone in 1998.

“Did you hear the new Tragically Hip single?” “No, why?”

Both those poets, Ken Babstock and David O’Meara, were Hip fans and got to know Gord Downie in the coming years—they were even referenced in his lyrics. The first track on Phantom Power features the tongue-in-cheek chorus, the one that so concerned the two young poets in question.

“Poets” is one of the most straight-ahead, Stonesy rock songs in the Hip’s catalogue, with nothing remotely abstract in the music that might deter people suspicious of poetry. The chorus quickly became a cliché referenced countless times in headlines and stories about Downie and/or other lyricists and poets. 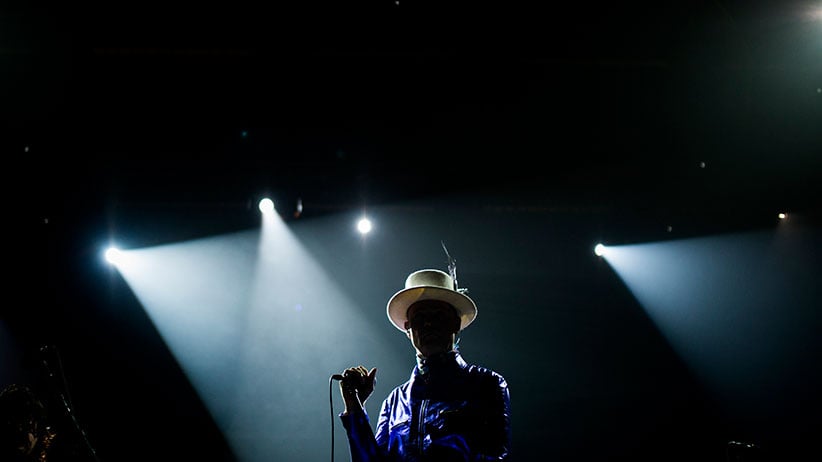 Poetry has a bad rap in our culture. Novelist David Mitchell says, “Too many people think it’s an elitist pastime, like polo; or twee verse; or brain-bruising verbal Sudoku. Poetry isn’t these things—or if it is, you’re reading the wrong stuff. Like music, you need to explore a little to find poets whose work speaks to you, and then you have a lifelong friend who’ll tell you truths you didn’t know you knew.”

Rock ’n’ roll culture in particular doesn’t want to know what poets are doing. The exceptions are rare: Bob Dylan, Lou Reed, Patti Smith. Though Leonard Cohen and Joni Mitchell wrote poetry and ran in rock circles, no one would argue they made rock music, no matter how many rock musicians they influenced. Anyone after Patti Smith was either a) nowhere near the mainstream, like Vic Chesnutt or Neko Case, or b) a cut-up surrealist, like Michael Stipe or Beck or Stephen Malkmus, more in love with the sound of language than its content. Pop music fans who wanted poetry were far more likely to find it in hip-hop than rock music. 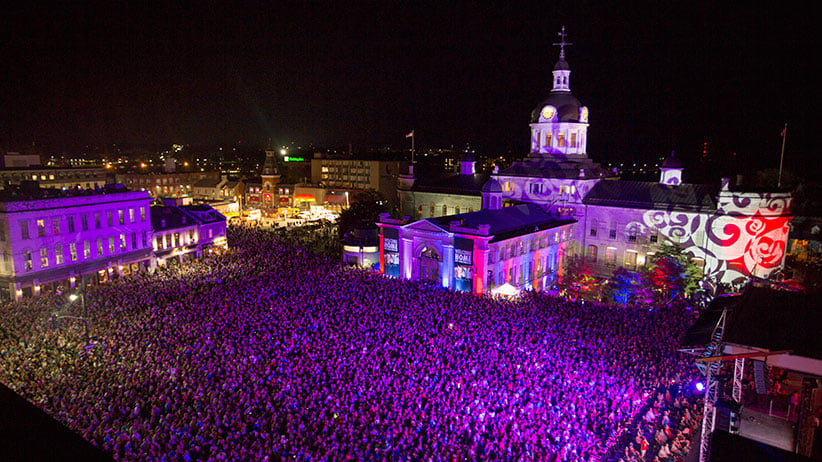 Except in Canada, where Gord Downie’s lyrics leapt out of radio playlists not just because of wordplay, or because of references both known and mysterious, but because his use of language was so evocative, so rich with meaning and allusion—coded messages that often deserved to be deeply examined. Sure, some were more successful than others. Some were plain-spoken and should never be read on the page: “Fifty Mission Cap,” “Courage.” Some were impenetrable nonsense, such as, ironically enough, “Poets.” But with each passing album, his language became as compelling on the page as in the music—more so, in some cases.

Not surprisingly, Downie has cited all those as key influences, as well as David Byrne, Van Morrison and, yes, Jim Morrison; Downie sang a few Doors tunes in his early days. Lou Reed’s 1973 album Berlin was also big. “We gathered around that record like you would around a campfire,” said Downie at a Reed tribute in 2013, where he performed “How Do You Think It Feels.” “We inhabited that record.”

His literary education came a bit later, in university. His friend Mark Mattson recalls first meeting Downie at the Prince George Hotel in Kingston, with Queen’s classmate and future Governor General’s Award-winning poet Steven Heighton, while blues band the Lincolns played in the back room, and students in the front bar discussed Margaret Atwood and Northrop Frye. “When I first started reading poetry, it was Irving Layton, Leonard Cohen and Al Purdy, and then it kind of moved into Sam Shepard and Raymond Carver,” said Downie in 2001. “In every case I was finding things that I could relate to: the plain-spoken language of the last two, and Purdy is very welcoming, obviously.” 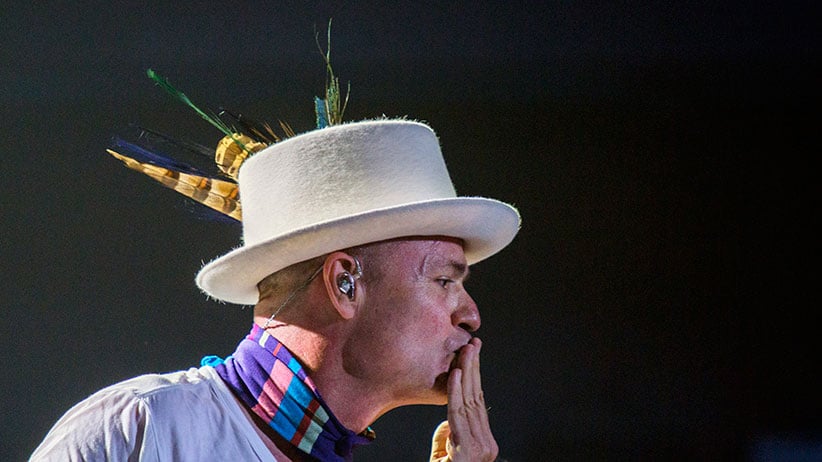 It’s Al Purdy to whom Downie most often gets compared, less so for an approach to verse than for the fact that both men defy the stereotype of a poet being an aloof academic, either twee or in tweed. Both were commanding orators who felt perfectly at home performing in pubs.

Margaret Atwood’s foreword to a Purdy collection published in 2000 could just as well apply to Downie. Writing about his breakthrough work, 1965’s The Cariboo Horses, Atwood wrote of Purdy, “I found that the drunk in the bar was also a major storyteller and mythmaker, though still wearing his offhand and indeed rather shabby disguise. This is poetry for the spoken voice par excellence—not an obviously rhetorical voice, but an anecdotal voice, the voice of the Canadian vernacular. Yet not only that, either, for no sooner has Purdy set up his own limits than he either transcends them or subverts them . . . In a Purdy poem, high diction can meet the scrawl on the washroom wall, and as in a collision between matter and antimatter, both explode.”

Perhaps Purdy’s most famous poem is “At the Quinte Hotel,” set in Belleville, just west of Kingston. In it, the narrator, a self-professed “sensitive man,” attempts to joke with the bartender, comparing his beer to half fart and half horse piss and all “wonderful yellow flowers.” He gets pulled into a bar fight, which ends with him sitting on the thug and saying,

“Violence will get you nowhere this time, chum. Now you take me: I am a sensitive man and would you believe I write poems?” He wins over the crowd with a recitation, moving them to tears in what he says is a “heart-warming moment for Literature.”

It’s easy to see why “Quinte Hotel” appealed to Downie: it’s funny, it’s unpretentious, there is the threat of violence and it’s set in exactly the kind of century-old Canadian Shield hotel bar where the Tragically Hip spent much of their youth. In 2002, Downie acted in a five-minute short film based on the poem, with Purdy’s own recitation on the soundtrack, and Downie performed it himself in the 2015 documentary Al Purdy Was Here.

When the Tragically Hip performed on MuchMusic’s Intimate and Interactive in June 2000, when Downie would have been working on Coke Machine Glow, they performed the song “Tiger the Lion,” which quotes the writing of composer and philosopher John Cage extensively. Downie dedicated the song to Al Purdy and recited most of “Quinte Hotel” over Rob Baker’s guitar solo. 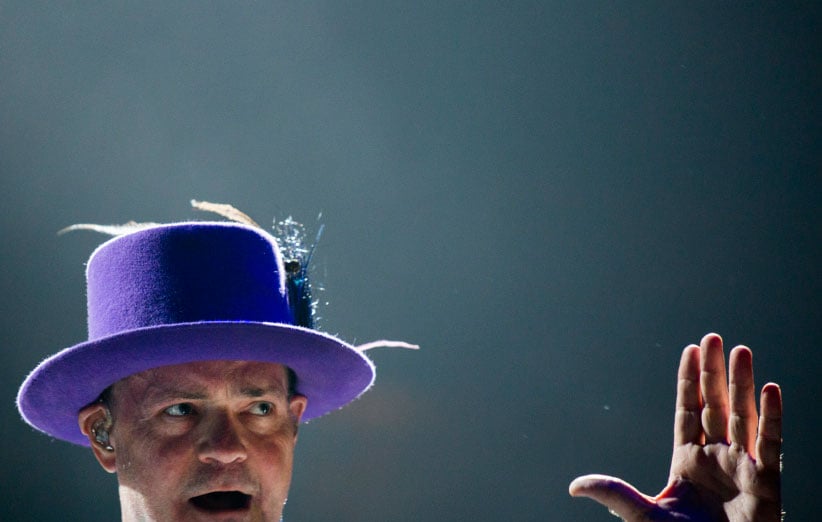 Gord Downie takes the the stage at the Air Canada Centre. (Photograph by Nick Iwanyshyn)

Shadrach Kabango, a.k.a. the rapper Shad, finds Downie to be a writer of “precision. I feel like the impression I’m left with is what he intended. John K. Samson would be another example of that. In hip-hop, there are a lot of people like that, from Black Thought to Kendrick Lamar, and across genres, [country singer] Jason Isbell would be another. With all those, you can tell that this person really nailed it. They conveyed emotionally what they set out to do.”

“There are so many levels going on in his lyrics,” says David O’Meara, whose 1999 poem “The War Against Television” was quoted in Downie’s “Leave,” from 2002’s In Violet Light. “If you look at a lot of lyrics in popular music, it’s facile and just there to fit the music. Downie had a way bigger game in his songs. Images and bits of narrative lead you toward independent thought. ‘We live to survive our paradoxes’—you can think about that line for days. Whenever I hear it, I think about what it means to bounce it off my own life, maybe where I was 20 years ago and what I’m planning on doing next. He wants people to think beyond the everyday, to think about the gift we’ve got from being here. He wants us to think about it, not just feed it to us.”

That is the very essence of literature, Northrop Frye argued in his 1963 Massey Lecture. “There is no direct address in literature,” he wrote. “It isn’t what you say but how you say it that is important. The literary writer isn’t giving information, either about a subject or a state of mind: he’s trying to let something take on its own form, whether it’s a poem or novel or whatever.” Let’s imagine Frye might have included song lyrics in that mix as well—maybe even some lyrics from the 2016 album Man Machine Poem that quote Frye directly, including the single, ”In a World Possessed by the Human Mind.”

Excerpt printed with permission from The Never-Ending Present: The Story of Gord Downie and the Tragically Hip by Michael Barclay (ECW Press)