Amid all the skewering, Christopher Hitchens tries a little tenderness in 'Arguably' 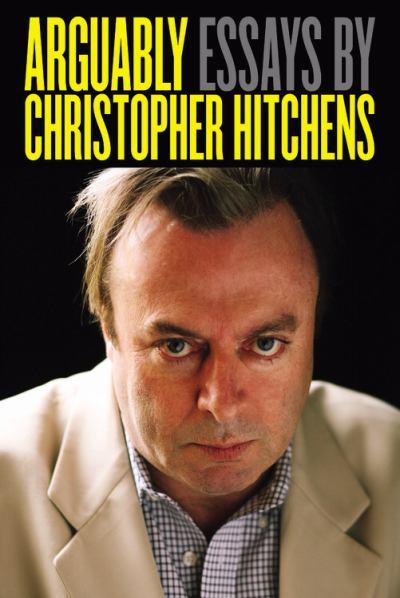 Your challenge should you choose to accept it: describe journalist Christopher Hitchens without using the words ‘contrarian’ or ‘provocateur.’

Mission impossible? It sure felt like it. Take away the well-worn descriptors—toss out agitator, fire-brand, fire-eater (there’s a lot of “fire” talk around the famous atheist) and antagonist while you’re at it— and you’re left with having to consider Hitchens’s work apart from the hard shell of his cultural persona.

That’s as it should be.

And not only because the author’s 2010 diagnosis of esophageal cancer has drawn a line under his mortality, but in an era in which Lady Gaga is also considered to be a provocateur, the term has lost something of its cachet, if not its thrust (political rather than pelvic).

Fortunately, Arguably, Hitchens’s latest collection of essays, provides a wealth of material showcasing the vital talents (and human weaknesses) of the author of more than 20 books, including 2007’s atheist manifesto, God is Not Great: How Religion Poisons Everything.

Arguably is a big book, a 750-pager guaranteed to topple the teetering ziggurat of unread material that’s perched precariously on your nightstand. Published by Twelve Books, which also put out Hitchens’s 2010 memoir Hitch-22, Arguably is a compilation of essays, political journalism and literary reviews written for such publications as Vanity Fair, Slate and The Atlantic over the past decade.

It’s been a rich 10 years for Hitchens, during which the former Trotskyite assumed an active post as the conscience of the left—a feat he managed while throwing his considerable intellectual weight behind unpopular wars in Iraq and Afghanistan. At the same time, he’s become a kind of global ambassador for atheism.

Arguably is a powerful illustration of what makes Hitchens such a rare bird among journalists, who don’t often come to the public party trailing such pretty plumage (and no, untucked shirttails do not count as plumage). The literary reviews for which he is renowned, such as 2006’s “Gods of Our Fathers: The United States of Enlightenment,” are workaday examples of the writer’s characteristic approach to his subject matter. Well-read doesn’t really cover it—effortlessly and from memory, he appears to draw from a university-library’s worth of learning. Here, the author’s inspiring ability to synthesize great chunks of political, social, and cultural history is on full display, as is his skill transforming a literary review into an essay (more than once I had to go back to figure out what book Hitchens was reviewing).

“Gods of Our Fathers,” which originally appeared in The Atlantic, is a tribute to Hitchens’s masterful skill as a debater. As to whether or not the Founding Fathers were men of religion, Hitchens asks the more pertinent question: “Why should we care?” especially given the fact that “they went to such great trouble to insulate faith from politics.” He provides evidence to suggest that even though they were living in a pre-Darwin, Deist culture, the Founders were a little more skeptical than Tea Party types might hope.

It’s the combination curiosity and follow-through—the desire to rescue the historical record from both the howling irrationalism that dogs partisan politics and the basic poor scholarship that blunts human intelligence —that makes his work educational. I’m tempted to say “for lack of a better word,” but is there a better word than educational?

On the subject of waterboarding, Hitchens offered himself up for a dousing in “Believe Me, It’s Torture.” Call it a stunt if you will, but it couldn’t have felt like it when the then 59-year-old author was hooded and lashed to a sloping board.

In another essay, a seemingly throwaway line recasts the abortion debate in practical terms. The question as to whether or not a fetus represents human life is absurd to Hitchens, who wonders “what other kind of life it could conceivably be.” And his essay, “Old Enough to Die,” on the barbaric practice of subjecting minors to the death penalty in the United Sates is one of his most powerful and affecting.

His assessments are often called withering—he slaps down meaningless public grief in “Suck it Up” and offers a very funny take on Prince Charles in “Charles, Prince of Piffle”—but he’s as likely to be tender and thoughtful as he is to be pitiless.

From John Brown to Abraham Lincoln to Philip Larkin, Hitchens shows real respect for the reputations of those who’ve proven themselves worthy. He doesn’t defend their honor—that would be maudlin—but strives to present a complete picture of their characters.

Hitchens isn’t really given his due when it comes to his marvelous restraint either. Often praised for “telling it like it is,” he’s as likely to make a point with humorous understatement as he is to go for the jugular.

In a review of Nicholson Baker’s pacifist novel Human Smoke, entitled “Just Give Peace a Chance?” Hitchens cites an infamous letter from Gandhi to the British people regarding the Nazis. In it, Gandhi enjoins British citizens to let the Nazis come over and play: “…if these gentlemen choose to occupy your homes, you will vacate them. If they do not give you free passage out, you will allow yourself, man, woman, and child, to be slaughtered, but you will refuse to owe allegiance to them.”

Hitchens’s response to the Mahatma’s remarkably kooky missive is to don his formal wear. “I must say that everything in me,” he writes, “declines to be addressed in that tone of voice…”

It may be because he has lived his illness so gracefully in the public eye that the emotional balance of his work, which can occasionally read as detachment, leaps out as a virtue rather than a failing in his essays. One wonders what the cost of being so graceful in public is for the private Hitchens. It’s a credit to his professional discipline, if not his durable character, that we never quite know the answer.

While there’s plenty of fine examples of Hitchens at full power on the subjects of Afghanistan and Iran and Pakistan, his writings on child soldiers in Uganda (“Childhood’s End: An African Nightmare”) and the horrific results of the continuing effects of Agent Orange in Vietnam (“The Vietnam Syndrome”) display his acute sensitivity and his moral courage—he looks at people we avoid and tells us things about both them and ourselves that we’d don’t want to hear.

Few writers, upon being taken to see the effects of dioxin on the deformed children of Vietnam, would have the courage to concede that, “One should not run out of vocabulary to the point where one calls a child a monster, but the temptation is there.”

Fewer writers still would take on such unremittingly dark subject matter, where there is no “healing” and the only conclusion to be drawn is that “This was not a dreadful accident, or a tragedy. It was inflicted, on purpose, by sophisticated human beings.”

While Hitchens rarely misses his target, there are a few examples in Arguably where his vulnerabilities show. Though he considers it his most “instantly misinterpreted” essay, his “Why Women Aren’t Funny” for Vanity Fair fails on a lot of levels. It reads like a conversation you might have with a wine-flushed professor, one who fancies himself a ladies’ man, but who in fact has only been patiently tolerated by a succession of forgiving and/or desperate women.

It’s hard to discern what point Hitchens is trying to prove; he concedes lesbians and “hefty” broads like Roseanne can be humorous and we’re left to conclude that they’re not really reflective of “women” as he sees them. And the P.G. Wodehouse-inspired tone of the essay isn’t funny, which doesn’t serve his ‘men = hilarious’ theory all that well.

But there’s a lot more great and good work in the collection than there are misfires. After reading the whole shot over the course of a weekend, it’s hard not to conclude there is something of an epic quality to Hitchens’s career. He’s fought the good fight against ignorance, cruelty and stupidity and for much longer than other similarly disposed authors, all the while demonstrating a fierce personal and professional blend of intellectual and physical courage. Sometimes he’s done it wearing in flak jacket, other times in tails. Gritty and gracious, rigorously contemporary and unexpectedly courtly, Christopher Hitchens has made it his habit to stare into the darkness and into the light and, if he occasionally flinches as surely he must, then rest assured, you and I will never be privy to it, such is the committed nature of his bravery.