In her award-winning memoir, Helen Macdonald shares memories of training a mercurial goshawk after the death of her father 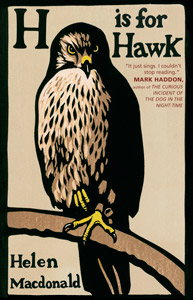 H IS FOR HAWK

If you’re keen to buzzing sounds from across the Atlantic, perhaps you’ve sensed the fuss over this book, the first memoir to win the Samuel Johnson Prize for Non-Fiction and beat out a number of exemplary candidates in fiction and poetry for the Costa Prize. The accolades are deserving. Macdonald has concocted her own, singular thing, a paean to numbing, overarching grief wrapped in a mini-biography of T.H. White further encased in her frustrating attempts to tame that most untamable of aviary beasts, the goshawk.

Let’s start with the grief. A few years ago, Macdonald, about to embark on a fellowship at Cambridge (where she remains affiliated to the history and philosophy of science department), learned of her father’s sudden death. The surprise jolted her into an all-encompassing, agonizing grief, one that she describes with moving clarity: “Shocking loss isn’t to be shared, no matter how hard you try. I can’t, even now, arrange it in the right order. The memories are like heavy blocks of glass. I can put them down in different places but they don’t make a story . . . For weeks I felt I was made of dully burning metal.”

The kindness of loved ones or even strangers could not reach where Macdonald hurt. Instead, she turned to training a goshawk she named Mabel, a challenge borne out of a childhood love of birds and wildlife. Her early frustrations and successes felt like great struggles and grand victories, dovetailing with her slow return to a more emotionally tempered life. Mabel is a majestic, mercurial figure, teeming with her own set of fears and appetites to be conquered. (“If you want a well-behaved goshawk, you just have to do one thing. Give ’em the opportunity to kill things. Kill as much as possible. Murder sorts them out.”) When Mabel finally learns how to fly back to Macdonald’s hands, it provokes a giddy restlessness in the reader.

All the while, Macdonald weaves in the tortured personal story of T.H. White, author of The Once and Future King, whose own struggles with training goshawks (in The Goshawk, written in the late 1930s but not published until 1951) mirror a lifelong shame over his truest, deepest, most closeted self. There are many narrative balls to juggle, and that Macdonald does so with supreme command instead of mere authorial competence is nothing short of a triumph.