An affectionate jab at the paradox of modern medicine

Book review: Half the Kingdom 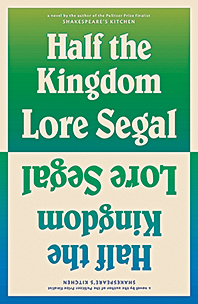 In Segal’s new novel, a critical mass of 62-plus-year-old patients in the emergency room of Cedars of Lebanon hospital are going “round the bend”—the staff’s code for dementia. The head of ER is starting to wonder about a public health crisis—if somehow Alzheimer’s has become airborne. Joe Bernstine, himself an elderly patient of the Manhattan hospital, believes it might be a terrorist attack. He dispatches his staff—hired to compile a “Definitive Compendium of End-of-World Scenarios”—to infiltrate and gather information.

Segal flits from character to character, giving the overall tone of the book an ephemeral quality and making its plot somewhat suspect—a little like the minds of the Cedars patients, in fact. One wonders whether Segal is suggesting that anybody’s perspective could be construed as “demented” at times. Joe’s daughter, Bethy, is years away from 62, but decidedly crotchety of temperament, for no apparent reason—she says “hello” with a glare, her voice “never less than nasty.” Joe’s friend Lucy is so preoccupied with hearing back from a publisher about a story she wrote that she presents herself at the door of a six-year-old’s birthday party asking to speak to the grandmother of a guest. This glorious scene is topped only by the story itself, which Lucy reads over the phone to everyone in her address book, and which features a man in an ambulance demanding a thesaurus when asked to describe his pain—none of the adjectives suggested by the medics quite fits.

Some have suggested the book is a jab—albeit a hilarious and somehow affectionate one—at the paradox of modern medicine prolonging people’s lives only to have them go round the bend. More fun is Joe Bernstine’s theory, which speculates that the Alzheimer’s “bug” was part of the terrorists’ plan “to drive us insane, while they keep us indefinitely alive. They are able to imagine a West entirely populated by demented, heart-healthy centenarians.”