With Harry Potter and the Cursed Child, J.K. Rowling brings her beloved series to an end 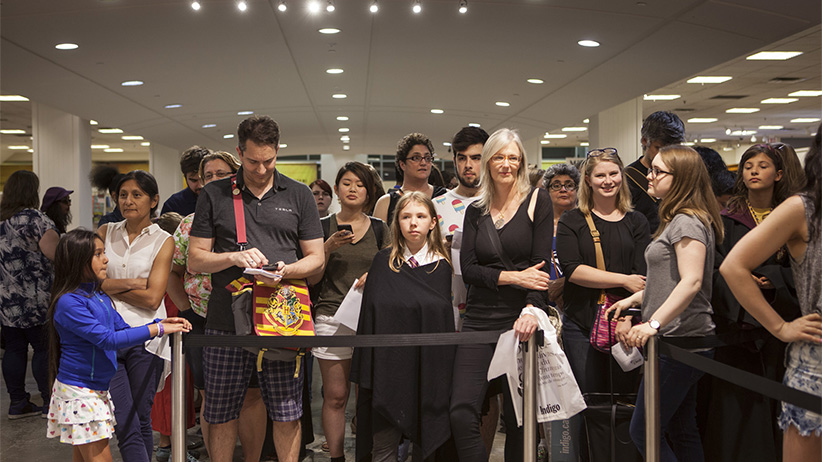 Harry Potter Fans eagerly awaiting 12:01am for the launch of Harry Potter and The Cursed Child. Photograph by May Truong

The power of Harry Potter to mobilize millions was on display Saturday night as fans around the world attended parties to mark the release of a script at a minute after midnight. But it’s no mere play transcript: Nine years after massive celebrations marked the publication of the last book in the original series about a boy wizard who battles evil, Harry Potter and the Cursed Child, Parts One and Two represents an expansion of the Harry Potter canon—and what author J.K. Rowling, who co-created the story behind the play, says will be the end of the Harry era. The Cursed Child is the last book.

Nearly two hours before the books were released, more than 100 people had formed a patient queue outside the Toronto Reference Library. Many were in costumes, holding wands, as they debated who was the “cursed child”—the odds-on favourite being Harry’s younger son, Albus Severus.

“It was too great an opportunity to miss,” explains Hasita Khan of suburban Mississauga. Her nine-year-old daughter, Hena, is obsessed with all things Harry, her father, Nehal, says, but has never been to an event like this. So they got tickets to this sold-out, free evening at the library. 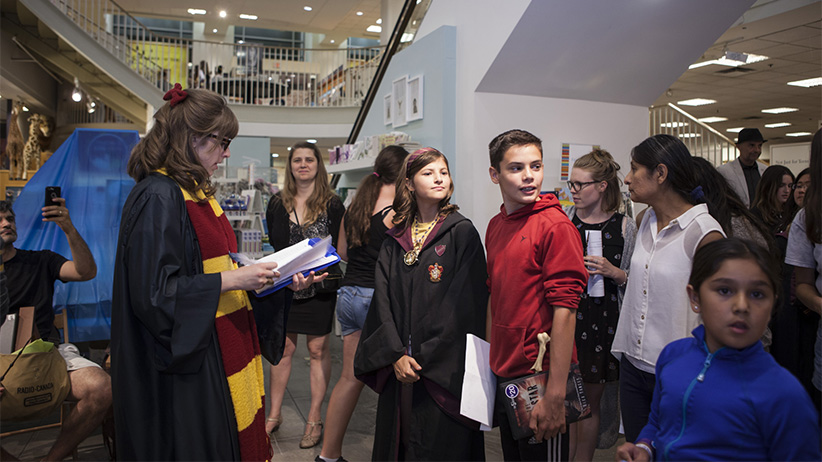 Amy Stocking (center) waits in line to get sorted at Indigo in Toronto, Ont. (Photograph by May Truong)

Once sorted into Hogwarts houses and given homemade wands that took library staff a week to make, the Khans and the other 350-odd fans got to make potions, have their fortunes told, practice their charms and watch Second City comedians transform shouted-out words from the Harry Potter canon into a routine. There, amid a “Free the Elves” poster, complete with a basket of socks, fans could have pictures taken of themselves “flying” on a broom, courtesy of a green screen and the Digital Innovation Hub. At the library’s adjoining bookstore, staff took preorders while others enjoyed cupcakes and butterbeer.

Some made a whole day of it. For Karen Cross and her daughter, Claire, 9, it started with a trip to a comic book store, then dinner nearby (with sticky pudding for dessert) before they donned robes to a late evening at the library. Karen remembers anxiously waiting for every book of the original series. “It’s part of why I wanted to bring her tonight,” she says. Claire has been waiting impatiently since February when she got a pre-order as a gift for her birthday—one that also featured a cake shaped like Hedwig the owl.

Overseeing the myriad details of the evening is Vicky Tourkolias, resplendent in a vividly clashing outfit worthy of Rita Skeeter. Opening the huge reference library for a late-night event is a first for the Toronto Public Library, but it makes sense. “The library is the place for this,” she says. “People expect libraries to take a lead.” At midnight, dozens lined up to check out 50 books that have to be returned in a week. The library system’s other 200-odd copies will be handed out to the first people on the hold list. 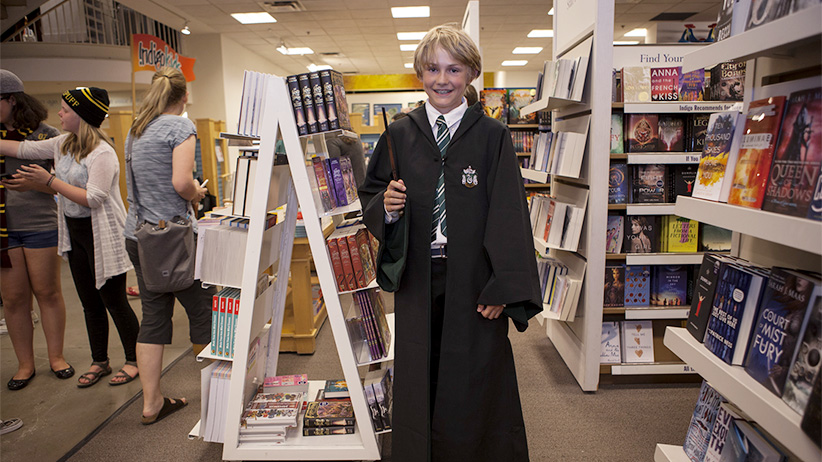 Conrad Griffin, age 12 at the launch of Harry Potter and The Cursed Child. Photograph by May Truong

Just a block away from the library, a thousand people have gathered at the night’s other literary hotspot: a bookstore. Lines snaked through the Indigo and Bay and Bloor, with people clutching their precious preorder slips. While some were parents with young children, new to the fuss and fun, others are old hands at such midnight madness. It was, after all, Elizabeth Jamieson’s third time lining up to be among the first to get a Harry Potter book, and she and friends Samantha Richardson and Helen Kuan all knew what they’d be doing Sunday: reading.

Given the play is five hours long (it is shown in two parts), the size of the script is equally large. While a paperback version of Shakespeare’s Julius Caesar is a mere 77 pages, The Cursed Child clocks in at a hefty 318. And it won’t be the last piece of new Harry Potter writing that comes in script form; in November, the screenplay for Fantastic Beasts and Where to Find Them will be released. Based on a short compendium of fantastical animals written by J.K. Rowling for charity in 2001, the film takes place in the United States, four decades before the Potter era. And unlike The Cursed Child, this screenplay isn’t based on a Rowling story, but is written by the author herself.