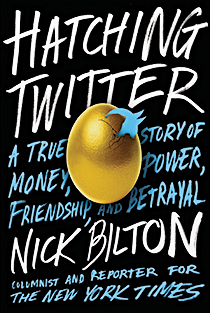 Is it possible to run a successful start-up without succumbing to backstabbing and betrayal? If the messy legal battles over Apple, Facebook and Snapchat have taught us anything, the answer seems to be a resounding no. Not one to buck the trend of corporate chicanery is Twitter, whose early days were filled with so much greed, mismanagement and breakdowns—emotional and technical—it’s a wonder anyone ever willingly wades into the tech industry (although the company’s $24-billion valuation is something of an incentive).

By focusing on the four men who founded the phenomenally popular micro-blogging service—which now boasts 215 million monthly users worldwide—Nick Bilton’s book acts as both a thrilling piece of business journalism and a salacious tell-all. The New York Times columnist—whose Bits Blog chronicled every step of Twitter’s uneasy birth—makes it clear from the beginning that the co-founders were in over their heads, and skewers each equally, almost gleefully. There’s Ev Williams, the Nebraska farm boy turned Web wunderkind; Jack Dorsey, the tattooed coder with a fondness for myth-making; the gregarious Biz Stone, who became the brand’s diplomatic arm; and Noah Glass, a sensitive techie who ends up missing one of the biggest paydays in history.

Bilton uses hundreds of hours of interviews with the co-founders and all former and current board members—as well as reams of internal emails and legal notices—to craft an expertly paced tale. With an eccentric cast of characters and a wealth of bizarre details—from Al Gore’s tequila-soaked offer to buy the company to rapper Snoop Dogg’s smoky surprise appearance at Twitter’s HQ—the book is practically begging for a cinematic adaptation à la The Social Network, or at the very least an HBO miniseries. Just think of the live-tweeting possibilities.