Heather O'Neill: 'So I go through life naked'

We profile the authors of the books shortlisted by the Scotiabank Giller Prize this year. Here, Heather O'Neill on writerly vulnerability 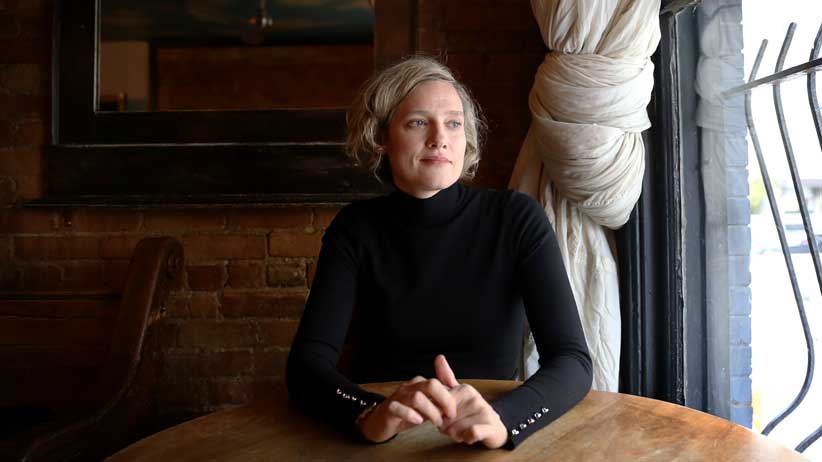 Given a literary climate that values inventive writing, especially when accompanied by the fabulous, Heather O’Neill has become prolific at an opportune time. Eight years passed between the Montreal author’s first novel and her second, The Girl Who Was Saturday Night, which brought her a place on the 2014 Giller shortlist. Now her follow-up, the short story collection Daydreams of Angels, is on the 2015 shortlist, making O’Neill the first author in the prize’s two decades to receive a nomination two years running. O’Neill’s stories combine wry playfulness—a child raised by wolves, “unexpectedly charming” fellow that he is, assaults another feral child, this one raised by monkeys—with her constant themes: orphans, twins and “ideas like what it is to be an individual and how we can manage to show exactly who we are,” says the writer. With her peers veering markedly between autobiography and forays into pure imagination, she wavers, O’Neill adds, between the two. “They’re just different ways of writing your story: you can tell your own story without the facts of your own life.”

BY HEATHER O’NEILL · When I was little, I was preposterously shy. I was terrified of saying anything at all, always afraid it might be judged as obscene or odd and subject to ridicule. One day in Grade 5, I felt overheated and took my sweater off in class. Everyone in class began cheering. I didn’t know why I was so popular all of a sudden. I knew deep down that I was especially amazing, but I had never been able to convince anyone else of the fact. And yet, there was a boy with his hands up in the air whistling and hooting at me.

It was then that I realized that my shirt had come off with my sweater. I was sitting in my undershirt that was covered in a pattern of tiny strawberries and had a minuscule white bow at the neck. I was living that nightmare where you realize that you are naked in a public place. But it was quite exciting. I liked all the attention and admiration my exposure had brought me. Perhaps our greatest fears are the things that we most desire? I took a bow and put my sweater back on.

I note this incident as a critical early indicator of a future of indecent and public exposure. There’s this feeling that I have whenever I complete a piece of writing—whenever I hit the send button—that feels a lot like that moment in a dream when you realize that you are only wearing a pair of rubber boots and you are completely naked otherwise. What intimate moment did I just confess to in my writing?

You’re not supposed to show people the private parts of your body: all that is carefully concealed by buttons and zippers and laces. In the same way, we keep all our personal ideas, our flaws, and our secret thoughts private. We speak in niceties and platitudes. We make sure that our words are dry-cleaned and have no holes in the toes.

But as a writer, you write about all the things that people don’t talk about in public: the pathetic feelings, the insecurities. The writer is like a child standing on tiptoe on the toilet lid in order to get a look at their naked body in the mirror, to somehow see in this vulnerable state, its true appearance.

I can never write in cafés or anywhere in public. The reason is that I consider writing to be a totally perverse act. It feels inappropriate to be writing about adultery and murder and betrayal while a child sits at the table next to me with a container of crayons, drawing lambs and roses. That’s what I adore in writing fiction. It is in these terrains of extreme make-believe that a writer exposes the peccadilloes of the human psyche that had hitherto escaped notice—or capture. These observations are rare, secret butterflies.

I think that I was probably a town crier in my past life. I would ring a bell and cry out. “Oyez, Oyez, Oyez.” Except then I would really have news that people needed to hear—like about the king giving birth. Instead I would just yell out what it felt like to be a single mom, what kind of guy I imagine kissing when I listen to rock and roll songs, what I worry about first thing in the morning, the parts of ordinary life that make me laugh, the favourite things that people have said to me in the grocery store, the most beautiful things that I remember about being little.

So I go through life naked, but in return life is as odd and unpredictable and as full of surprises, as a dream. And, yes, one receives the occasional smattering of absurd applause.