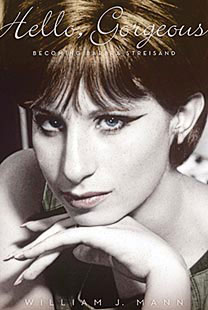 Culled from exhaustive research, Mann’s bio does not look at Barbra Streisand’s entire, sprawling career, but rather chooses to focus on the four years between 1960 and 1964 in which the hungry young aspiring actress was transformed into a superstar. Babsphiles will find reason to rejoice, as there are plenty of juicy anecdotes about romances and trysts, including her budding relationship with Elliott Gould which would lead to their tying the knot. It would also lead to plenty of inevitable a-star-is-born envy for Gould, as his career would not take off at quite the same stratospheric pace.

Much of what Mann tells us is not entirely new, but the experienced, celebrated biographer—his credits include tomes on Liz Taylor and Kate Hepburn—does manage to upset some previous Streisand lore. In particular, the author gained access to the private papers of Jerome Robbins and Bob Fosse, which clearly indicate that there was never really any debate over Streisand taking the lead role in Funny Girl. As well, he debunks the myth that she was fired from a gig in Winnipeg—while she did leave the stage early one night, apparently put off by an unresponsive audience, she completed her contracted engagements in full. (We can all get a good night’s sleep, finally.)

But aside from hardcore fans, even some heterosexuals will find value in Hello, Gorgeous. It reads as a play-by-play account of a long-gone period in American pop culture, when a young lass with a great set of pipes and an off-kilter persona could forge her way into fame. Mann gives great insight into the machinations of celebrity of that time, and he paints the picture of behind-the-scenes Broadway in such vivid detail that it feels like a trip in a time machine.