Hope for the American dream in The Book of Unknown Americans

A review of The Book of Unknown Americans 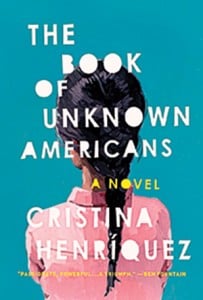 THE BOOK OF UNKNOWN AMERICANS

The concept of the American dream has taken all sorts of hard knocks lately. Income inequality is as high, if not higher, than in the age of the robber barons, with the rich getting far richer, the middle class evaporating, and poverty rising to alarming levels. Changing demographics and inconsistent policies mean that immigrants looking for a better life may come nowhere close to finding it.

And yet, hope stubbornly persists, as Cristina Henriquez demonstrates in her stunning new novel. In the book’s ingenious structure, one group of families is a through-line to a much larger kaleidoscope of voices: people who have found their dreams, lost them, continue to strive for them, and remain committed to their goal of being Americans, whatever form that takes.

The Riveras have left their small-town Mexico life behind for an uncertain future in Delaware after their daughter Maribel suffered a catastrophic accident at the age of 15, one for which her father, Arturo, bears considerable guilt (if not outright responsibility); for her mother, Alma, it is an albatross around her neck. Their wish is that Maribel recover to her former self; Maribel wishes to make do with what she has, especially when she meets the slightly older Mayor Toro, the son of Panamanian immigrants. Their love is suitably star-crossed—both families disapprove—but their story illuminates the larger picture of dashed ambitions, making the best of things, and finding happiness in the midst of struggle.

Henriquez wastes few words in bringing the flaws and strengths of each Rivera and Toro family member to life, and masterfully casts their stories against that larger mosaic of newly minted—or almost—Americans. People like Benny Quinto, who arrived from Nicaragua and who, eight years later, knows that he “took a couple of nasty turns, but I ended up all right,” or “Fito” Angelino, a boxing hopeful from Paraguay who takes his building manager job in stride: “If people want to tell me to go home, I just turn to them and smile politely and say, ‘I’m already there.’ ”

The Book of Unknown Americans brims with empathy and humanity. It has the power to evoke tears, laughter, anger and delight, and resonates long after it’s finished.