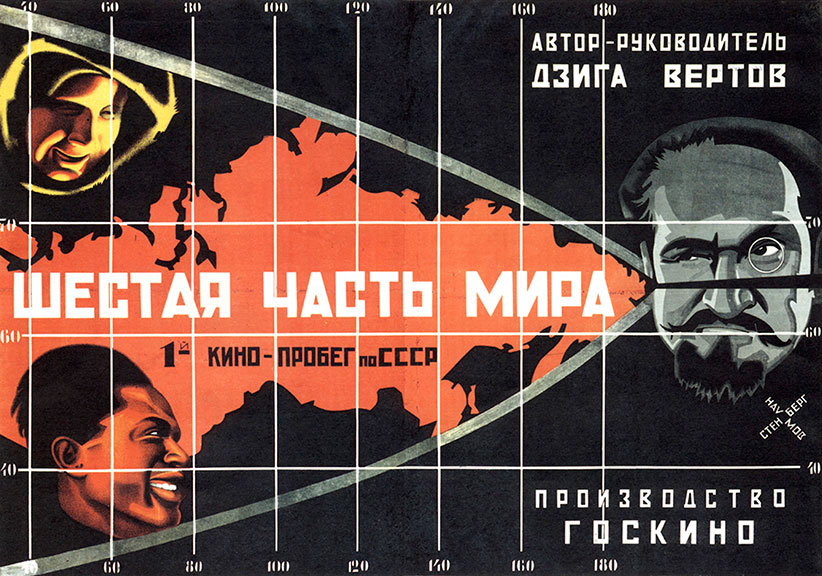 Poster for the film ‘The Sixth Part of the World’, 1926. The film, a documentary, was directed by Dziga Vertov. Found in the collection of the Russian State Library, Moscow. (Fine Art Images/Heritage Images/Getty Images)

Belfast native Timothy Phillips, author of Beslan: The Tragedy of School No. 1 (2008), has an Oxford doctorate in Russian Studies. Since his Beslan book—about the siege at the southern Russia school by Chechen terrorists—he has pored over newly declassified British files pertaining to the turbulent 1920s. In them Phillips found traces of a proto-Cold War that began decades before the real one, the foundations of Western-Russian relations for the coming century, and a treasure trove of very human details, all laid out in his new book, The Secret Twenties: British Intelligence, the Russians and the Jazz Age.

Q: How did the release of this material come about? This is not, to put it mildly, the usual practice of a spy agency.

A: Back in the 1990s, MI5 decided to declassify some of its historic material. Basically it started with First World War material and then moved on to the second war—the best stories for them to tell because we were the good guys and we were on the winning side. Starting 10 to 15 years ago came the stuff from the 1920s. Now we pretty much have it all—96, 97 per cent of what wasn’t destroyed over the years. All from MI5, the domestic counter-intelligence agency, that is. MI6, which spies abroad, has not been subjected to the same declassification exercise, although very occasionally in the MI5 archives I found an MI6 document that had been shared with its counterpart, and that was a very exciting moment. My book is the beneficiary of what I think is a unique project in the world—a major intelligence agency unilaterally deciding to open its files.

READ: The Russian spies who raised us

Q: The overarching theme you found is familiar today, albeit with Putin replacing the Politburo. It was as though there hadn’t just been a massive war with Germany. Soon after 1917, as in 2017, and dominant until the rise of Hitler, it was Russia, Russia, Russia: in particular, what threat did the new Soviet Union pose to the internal security of Great Britain?

A: There’s no question that some of the most reactionary voices in 1920s Britain had already been finding things very unpleasant before the start of the Great War—1913 is a historic year for the number of strikes—and some people really thought the country was heading to revolution then. The huge sacrifices of the war and the coming together as a nation at that time led those people to believe things would go back to normal afterwards. In reality, of course, that’s not what happened. The Labour Party grew and grew, and separately the Soviet Union came into existence and had quite a hostile posture towards the rest of the world. For conservative forces within Britain, these two things become blurred, the accelerating social changes in Britain and the outside revolutionaries with their scary, threatening rhetoric.

Q: There are parallels here with the U.S. Red Scare of the 1920s, no? American officials concentrated on the Communist threat and ignored how the Ku Klux Klan had turned from a suppressed regional group into a burgeoning nationwide organization. And that was partly because some of the investigators were members themselves.

A: It was exactly the same.

Q: Your MI5 agents represented their class as well as their nation. They were conservative Britons.

A: That’s right. When Ramsay MacDonald, the first Labour prime minister, was presented with a major intelligence report, he looked at it and replied, “All the stuff about Communists is well known, you’ve just pulled it out of newspapers. Why are you pretending it’s highly secretive and sensitive? And, by the way, you don’t mention fascists at all. Can you please go away and redress that?” It would be wrong as well as an anachronism to say that all British intelligence officers were fascist sympathizers in the 1920s, but when they looked down the list of the things that kept them awake at night, the growth of the radical right wasn’t one. When the general strike threatened in 1926, they thought that they could actually co-operate with the radical right to try and keep the country on track. In the final analysis, MI5 officials in the ’20s saw the right as potential allies, not enemies.

Q: Your book explores the way British and Soviets haltingly set, with numerous false starts, what would become durable rules of diplomatic-espionage engagement between East and West.

A: There was intense debate within the British elite on how to deal with this new state. People like Churchill said that these guys are bad people and misbehaving in terms of the global structures that we live by, so we should have no connection with them, no trade, no relations. More pragmatic voices pointed out you can’t just say that to everybody you disagree with, we have to engage. But the intelligence community kept on harping on the threat and the government finally acted to expel all the Russians in Britain and break off diplomatic relations. The way in which this set the tone for the rest of the century is that no matter how bad things go after that no British government ever did that again.

A: It turned out like punching the wall during an argument. You do it once and you discover it doesn’t change the terms of the debate at all. It actually only hurts your own hand. It was counter-productive on the most basic level: to bring the case to expel the Russians—which, ironically, had as its excuse the theft of a very basic British army signals manual—the British government revealed to the Russians that they could decode their telegrams. Of course the Soviets immediately changed their codes and we could no longer decrypt them for over a decade. More generally, it’s kind of embarrassing to expel people and then invite them back a couple of years later, or not have anyone to talk to during a crisis. From then on, even during much higher-stakes moments in the Cold War, you don’t get this kind of response.

Q: Geopolitics aside, it’s the personal details in the files that distinguish your book, from the Soviet spy who adopted—presumably from the first whisky ad he saw—the code name “Johnnie Walker,” to the eminent cultural figures suspected of excessive friendliness to the USSR. Were the likes of Virginia Woolf or John Maynard Keynes followed around by MI5?

A: Agents certainly paid a lot of attention to them when they attended meetings of cultural exchange groups, but there’s little else in the files. And here it’s probably safe to say that any files opened on people like that ended up being destroyed long ago. If you imagine having a file on Virginia Woolf, the spies would be embarrassed to eventually admit all they’d managed to collect is that she was a novelist with some interest in Russia. Lots of people were deeply interested in Russia, even before the war—Dostoevsky, Tolstoy, the ballet, and then, after the revolution, the cinema.

Q: We do have to talk about early Soviet film, especially that arresting moment when British spies and senior bureaucrats gathered to watch Battleship Potemkin.

A: When I think of all the things I wasn’t expecting to find, MI5 spies attending secret film viewings and contributing to reviews was right up there.

Q: What impressed me was they thought Potemkin a great movie, which was precisely why it had to be banned—the First Lord of the Admiralty thought sailors who viewed it would be mutineers the next day.

A: Yes, they had taste. In some ways, they appreciated Soviet cinema as much as the Left.

Q: To return to individual stories, there’s the sculptor Claire Sheridan, who received inordinate attention because she was Churchill’s cousin—their American mothers were sisters.

A: That’s right. I think MI5 might have wised up sooner that, despite the affair with the Soviet official and the trip to Russia she was no Bolshevik agent, if it hadn’t been for the Churchill connection. But really, when she came back from Russia, she’s not really showing much interest in the place. When her close friend Sidney Russell—an ex-MI5 agent encouraged by his old colleagues to check her out—asks about the trip, Sheridan just loans him the diary she kept!! She would have been an absolutely terrible spy. Of course, MI5 followed her right up to 1940.

Q: She and Russell could both be considered emblematic figures of their time.

A: Oh, yes. Sheridan began to sculpt when her infant daughter died, then, after her husband was killed in the war, she left her other children with her parents and went full-time into sculpting. She became celebrated for her busts of famous sitters, including Lenin during her Russia trip. And I hope somewhere, someone has a secret archive on Sidney Russell. He was a lover of John Maynard Keynes at Cambridge; when he was in my sights he was MI5; then he was a stockbroker whose flat was still used for secret meetings; and then, in mysterious circumstances in 1930, he shot himself or someone shot him in the same flat.

A: The question of women was interesting to me because when you first encounter in the files the allegations that the Soviets were flooding London with femme fatale agents, you guess there must be some smoke to this fire. But when you look at the evidence, it’s really just a complete red herring. It’s based entirely on prejudices about the way in which women were having more freedom in the Soviet state—they were actually part of the delegation to Britain. The British delegation to Moscow was all-male. The ones in Britain didn’t look like smart middle-class London women, but they seemed more forward and more sexually liberated, and the fact some British women admired this about them and about Russia was all wrapped up in agents’ fears, to the extent that women pushing to wear trousers and such was seen as some kind of Bolshevism of fashion, or a first step in the nationalization of children. Particularly in the early days, especially 1917 to 1920, the chaotic Soviet state could be whatever you projected on to it. As bad as could be or, if you had any hopes for the Left, you could think in terms of good things that might come to pass.

Q: There are deeply personal stories in the archives, from miscarriages to love affairs, all gleaned by agents reading mail and listening in on phone calls. For historians, this is a source like no other, but for the rest of us a cautionary tale.

A: Given the technology of the 1920s, it’s remarkable how much they swept up—you’re suddenly reading someone’s actual letter about stuff that has nothing to do with espionage. But today, intelligence agencies are amassing all of our text messages, all of our email transcripts, all our conversations, and maybe the conversations are searchable like we can search Google. If this stuff isn’t destroyed routinely, future declassification will provide pretty much everything that’s been said. There’s something to worry about.