How Anne Carson makes us wish we were smarter

Our review of the Canadian poet's latest book, 'Red Doc >' 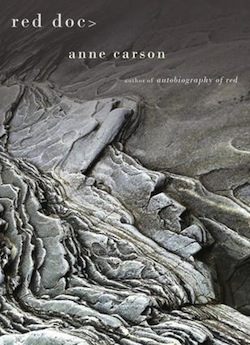 Poets must envy her. A typical poet, if there is such a thing, does not win a $500,000 MacArthur “genius” grant, and become the subject of a feature profile in The New York Times Magazine. Especially one as audaciously avant-garde as Anne Carson. This Canadian-born enigma, who teaches ancient Greek, paints volcanoes, and is adapting a sonnet cycle as a choral dance spectacle, is the Robert Lepage of poetry. To read her is a challenge and a thrill. Red Doc> arrives as an orphaned sequel to Carson’s crossover hit, The Autobiography of Red (1998), which recast Geyron, a winged red monster from Greek mythology, as a contemporary gay teen. Now called G, he lives in a red hut by a freeway underpass, reading Proust and tending a herd of musk oxen.

Red Doc> defies plot summary, but as Carson plunges down black-diamond couloirs of narrative freefall, there’s nothing abstract about it. Her writing is intensely cinematic. G embarks on a surreal road trip with Sad, a traumatized war vet, and drives north past “panels of a torn planet,” “black chunks of lava” and “cliffs with white shocks of waterfall.” They park in a glacier cavern where G tests the ice like a trampoline and drops through a fault, seduced by hypothermia, “that old cliché of polar adventure fatigue flooding his body in waves, silver ebbing and flowing.” And when G flies free—“Wings wildawake. Front body alive in a rush of freezing air?.?.?.?the ancient smell of ice floods every corner of his skull”—it’s like an action scene from an icy Avatar .

A verbal acrobat and compulsive inventor, Carson dreams up words like “warplay” and creatures called “ice bats” who dwell in Batcatraz. Vaulting genres, she’ll steer a car toward a lava flow or have a riot interrupt a play called Prometheus Rebound staged in a psych clinic. She’s a dramatist with an ear for domestic dialogue, and an eye for intimate detail. After a tryst in a laundry room, sex is “like pie without a fork” and love is “a big bunch of grass that grows up in your mind and makes you stupid.” Carson messes with our heads and makes us wish we were smarter; it’s huge fun just trying to keep up.