How Daniel Mendelsohn found his father through Homer's 'Odyssey'

When the eldery Jay took his son's seminar on the epic, a profound personal and intellectual journey was launched 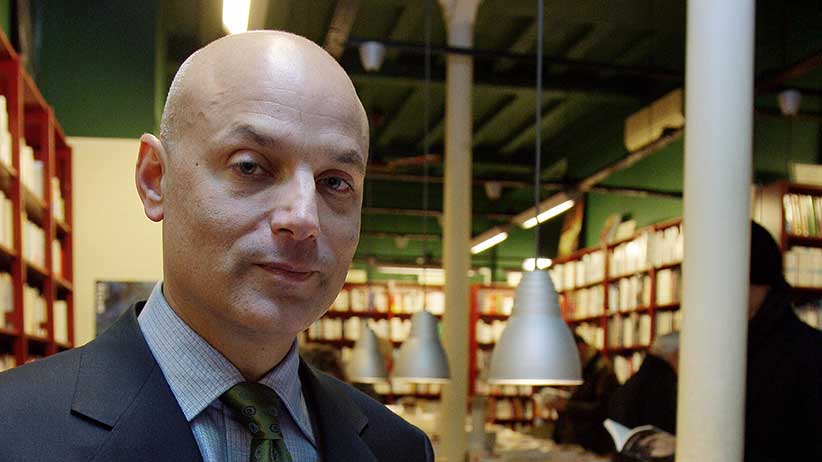 When Daniel Mendelsohn’s 81-year-old father, Jay Mendelsohn, a retired research scientist with some uncompromising ideas about life, decided to take his son’s first-year seminar on the Odyssey at Bard College in 2011, life began to imitate art in uncanny ways. Just a year later, Jay Mendelsohn died after a fall.

Structured around the form of Homer’s epic poem about fathers and sons, Daniel Mendelsohn’s new book, An Odyssey, is itself a profoundly personal but also provocatively intellectual journey. Recently, Maclean’s spoke by phone with Mendelsohn—an award-winning memoirist, critic, translator, classics scholar and frequent contributor to The New Yorker and New York Review of Books—at his home in New York’s Hudson Valley.

Q: Can you describe your father?

A: I always start with the fact that he was a mathematician, which structured both his intellectual and his ethical life. He liked facts, he liked logic, liked arguments that were sound. He didn’t like bullshit, and to my knowledge only lied once in his life, for reasons I explore in the book. His favourite word was “rigorous.” For him, if something is rigorous it means that it’s tough, something unyielding in its standards. His vision of the world was inflexible to some extent. He hated people who “got away” with things. But he was a softie at times, and sentimental as he got older. I don’t think he ever quite worked out how to integrate the two.

Q: That sounds like a challenging personality to grow up with…

A: It wasn’t easy, because I was terrible at math, and he couldn’t understand why it was so impenetrable to me. So I was a bit afraid of him, and also embarrassed because I thought he didn’t approve of me. I liked art and books and languages and ancient history. Not that he didn’t approve of those things; quite the contrary. Looking back, I think I was just projecting my insecurities on to him. It’s funny: I have a significant career as a critic, and I realize I’ve imported into that life all these principles that were important to my father. When I was assembling a collection of my essays, I kept noticing how much I used the word “rigorous.”

Q: You say you didn’t get to know him until you began studying the classics.

A: My father was ambivalent about the fact that he never finished his PhD, so he was both proud of and, I think, a little competitive with me when I went to graduate school. But once he saw what was involved, and understood it was a tough and rigorous program, he was full of approval. So that brought us closer. I studied Greek and Latin—languages that embody the highly structured paradigms that made sense to him intellectually. So some barrier had been breached, I think.

Q: When he first told you he wanted to take your seminar on the Odyssey did your heart swell or sink?

A: At first I thought it was kind of great—and typical of my father that, at 81, he was eager to keep educating himself. I knew he regretted never finishing the Latin sequence he’d begun in high school— he was a star in the class—and so to some extent his taking my class was an effort to finish the unfinished business he had with the classical text. But I did worry about the logistics. It’s hard enough having strangers in the class when you’re trying to forge a bond with 18-year-olds, but for that stranger to be your father is an added challenge.

Q: Not to mention the reversal of roles, with you the teacher and he the student.

A: Yes, absolutely. As the semester progressed, the pedagogy was complicated by the fact that there was someone in the room who, for the students, had more authority than the professor did, by virtue of being a father. And because my father’s take on the Odyssey was often very contentious and challenging to my own interpretation, it was as if we had the leader of the opposition in the classroom—which turned out to be a good thing, because it gave the students a pole to align themselves with. My father’s challenging me emboldened them to speak their own minds, which was great. As the semester went on, they became more comfortable questioning me and my interpretation of the book and proposing alternate interpretations.

Q: Your dad objected to Odysseus as a hero on the grounds that he lies, cheats on his wife, gets too much help from the gods. Do you think this challenge to his certitudes about how the world should be made him a bit nervous?

A: He just really, really disapproved of Odysseus. To literary people, Odysseus is admirable because he’s a hero of language, a storyteller. He manipulates narrative to get what he wants, he’s a fabulous raconteur, he’s a master punster. So writers don’t question his heroism. But my father had no patience for trickery or subterfuge, and he just didn’t understand why Odysseus was considered so great. The Iliad, however, was a poem that made sense to him because its values are absolute. Having lived through the Second World War as a young man, he appreciated its grandeur and toughness and high colour, and responded to it in a way I could never quite get him to respond to the Odyssey.

RELATED: On Homer, fine-tuning ‘The Iliad’ and being the rock star of translators

Q: So it makes sense that the one part of the Odyssey he loved was the Cyclops episode…

A: Yes, because Odysseus’s victory over the Cyclops involves an extremely elaborate pun in classical Greek, only a little bit of which comes out in translation, but which I explained to the class. My father was enthralled by that—it was the one time he approved of Odysseus!

Q: After the seminar you and your father went on an Odyssey cruise. I gather this is quite different from a Disney cruise?

A: It’s definitely not for people who want all-you-can-eat shrimp. We were given a very serious reading list beforehand. At Troy we were given a tour not by a person waving a pink umbrella but by the archeologist who was excavating the site. A number of people on the tour were serious classics scholars and that, of course, won over my father, who would never have consented to go on just a pleasure cruise. A cruise that involved study, hard work and a long reading list was something he could approve of!

Q: There’s a touching moment when he leads you by the hand into Calypso’s cave because of your fear of confined spaces and then tells the white lie that you were in fact leading him. It sounds like the cruise brought out a different aspect of his personality.

A: It’s a truism that travel is “expanding” for a person, but it really was for him. In our other travels together, and most dramatically on the Odyssey cruise, my father relaxed into a version of himself that hadn’t often been given scope in his life. He was a different person on that cruise—affable, sentimental, humorous; he charmed everyone—and that strangeness made me appreciate something the Odyssey appreciates: that no one is just one thing. The Odyssey is about self, identity, disguises and recognition; it understands that you’re a little different depending on whom you’re with and where you are.

WATCH: What Canadians think of travel and transportation

Q: You put forth some uncanny parallels between your relationship with your father and the text. Did these parallels leap out at you at the time? Did some emerge only during the writing of the book?

A: A lot of them I understood after the fact, but some were just so obvious. I mean, here we were on an Odyssey cruise and we met an elderly Belgian man who had an amazing World War II story about how he got the scar on his leg! [A turning point in the Odyssey concerns a scar on Odysseus’s leg.] Between that and the Calypso’s cave episode and the never getting to Ithaca, by the time I got off the boat I knew I needed to write about it. I wanted the book echo the structure of the Odyssey, so I had to figure out how to do that in a way that was meaningful to me but that would also be interesting to a reader who might not know the text intimately. That’s why I decided to recreate the classroom discussion, as a way of giving the epic to the reader.

Q: Telemachus, like you, is the boy in search of his father. Do you identify with him?

A: When I started writing this book I was indeed a boy in search of his father, and I self-consciously replicated the fact-finding trips that Telemachus takes in Books 3 and 4 to interview his father’s elderly friends. I interviewed my uncle, who’s a kind of Nestor figure and had the key to my father’s childhood, which turned out to be very different than I imagined and explained a lot about him. My interview with my father’s best friend and his wife, Nino and Barbara, is modelled on Telemachus’s visit to Helen and Menelaus, and I learned some stunning facts about my father from them.

One reason the Odyssey is so great is because all sons are Telemachus figures. If you have any kind of imagination, you want to understand who your parents are—you get to a certain point in life and you’re finally in a position to figure out what motivated them. Like many long marriages, my parents’ went through periods of difficulty and tension, and we were very sensitized to that, but at the end of the day it turns out we didn’t understand anything about it. I think that happens to Telemachus too. He doesn’t understand why his parents don’t act the way he would act, especially at the book’s climax, when they’re finally united. It’s a wonderful scene that expresses a great psychological truth: we never really understand our parents’ marriage.

When my father died I didn’t feel we had any unfinished business. We’d gone through all our stuff and we went through it all largely because of this Odyssey experience.

Q: What do you think your father would have thought of this book?

A: I like to think he would have liked it. And I think he wouldn’t have minded the parts that are tough on him, that are honest about his shortcomings and the less attractive aspects of his character. He felt it was better to be honest than flattering. He had no problem with my first memoir, The Elusive Embrace, which, like this one, had a number of anecdotes about him and which entwined readings of different texts around personal narratives. When he read it he said, “It’s complicated, but things are interesting in direct proportion to their complexity.” That was my dad in a nutshell, and I like to think he’d appreciate this book for those reasons.