How Dave Bidini came to know and love Canada's North

Bidini, who visited Yellowknife eight times for his new book, recalls catching a 10-pound northern pike and being dazzled by skies of gold, purple and rosewater 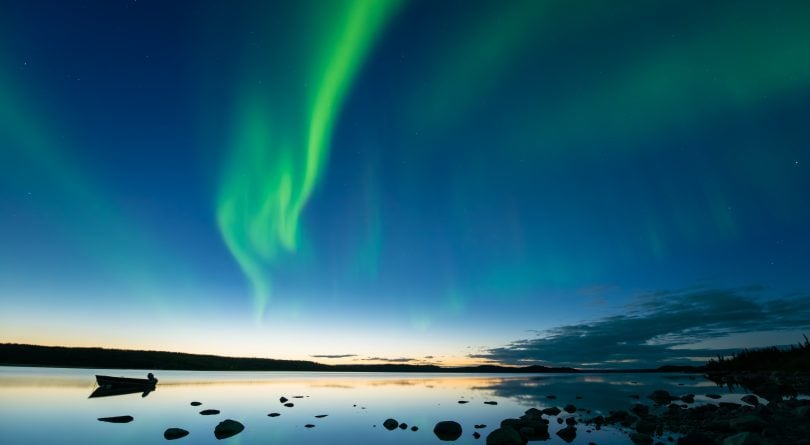 Like a lot of Canadians, I’d been to the “North” before, although the notion is arguable. North, to me, was a Georgian Bay cottage, a gig in Thunder Bay, maybe a literary festival somewhere above Saskatoon. “North” was even, preposterously, the highway in B.C. that runs from Prince George to Prince Rupert, although you’d have to climb days further to know the true depths of winter. A lot of my Northern-ness had been experienced during hockey trips out of continent—to Ulaanbaatar, Omsk, Harbin—and whenever I’d gone to the 60th parallel or above in Canada, it was for a cup of coffee: a week in Iqaluit, a pop festival in Dawson City, a film screening in Whitehorse. I’d never known the North in a country that is known for its North.

This changed during my time in Yellowknife, N.W.T. Like a lot of places that greet surprise visitors with “Nobody ever comes here!” Yellowknife bear-hugs for those who make the effort, and this was true during my time there: one local or another spiriting me across town from bar to monument to diner to bar again. In 2015/16, I visited the city eight times while writing a book about the Territories, Midnight Light. It was in Yellowknife that I felt most connected to my Northern-ness, shuttling around the region in several vintages of Otters and Beavers and other aircraft named after animals. I played softball on the shores of the Arctic Ocean in Tuktoyaktuk, talked to ravens in Deline and vomited in a float plane above Nahanni National Park Reserve, although the veteran pilot, Ted Grant of Simpson Air, had seen it all before, working the controls hunched over like the Great Oz while a crosswind batted us about the sky. When I wasn’t hurtling through the air, I was standing rooted in wonder at this great, neglected (at least by the South) part of Canada, warmly embraced by the Dene people, who let me sit at their elbow while I learned the suppressed history of our country, and understanding that it’s not until we seek counsel from Indigenous people in Canada that we will ever stickhandle our fate.

One of my visits lasted four months—I lived in Yellowknife’s Old Town, in a cabin on the grounds of Cathy Allooloo’s Narwal Bed and Breakfast. I chose to be there in summertime, embedded as a reporter at one of the great, and last, independent newspapers in Canada, the twice-weekly Yellowknifer. My workday mornings started with the sounds of the Allooloo huskies waking in their pen and a choir of birds singing beyond my cabin window, their melodies wild, beautiful and new. One of the birds whistled a three-note rising figure that reminded me of a small child wheeing down a bannister, while another honked like a parent trying to hector me out of bed. Shaking my blankets to the ground—the cold still teased the night even though it was early June—I grabbed my toothbrush, toothpaste, towel and empty coffee pot and walked across the chainsawed yard to the Narwal. Inside, I exchanged passing glances with the other guests at the B&B: a dozen sandalled Italians grilling sausages in the kitchen’s toaster oven, three hardy German tourists in hats and shorts looking over a map, and a transplanted Scotsman, David, who lived in Nunavut, wore a too-short blue bathrobe, and spent most of his time in the small common area watching American daytime TV on the Allooloos’ satellite dish.

If there weren’t people inside, they would be scattered about in the shade of the grounds’ rock face, being fitted for life jackets or shown how to handle a paddle before heading out for a morning scoop in Great Slave Lake. Cathy and a few young volunteers brought the tools of adventure down to the dock while school kids and their mums arrived for summer camp programs. One morning, I stood in the cabin in my underwear, rubbing sleep from my eyes, when a mother and young girl opened the door looking for their program, which, in previous years, had been held indoors, a detail that the Allooloos had neglected to share with me. The mother blushed and covered the young girl’s eyes—I blushed and covered my nards—and said she was sorry before walking backwards out of the cabin. I shouted that it was fine—“Canadian literature in its natural habitat,” I may have suggested—before realizing I should probably get dressed.

The summer skies above Yellowknife—painted gold, purple and rosewater by the latitude—were always busy with a Beatlesque carnival of float planes that filled the air in the nearly 24-hour light. They arrived in Back Bay announced by a distant propellered flutter followed by their cool shadow—Skyvans, Norsemans, Buffaloes—and cruising low enough that it seemed as if I could poke them with a paddle. My sense of adolescent glee while watching these long-shoed mechanical raptors skid to rest on the water proved limitless, my imagination piquing whenever the planes were from Wolverine Air, which I thought couldn’t have sounded more Northern. The planes moved both weightlessly and with an enormous sense of force and power—Back Bay was at the heart of an aerodrome—before landing merrily pontooned on the lake, their noses bobbing in self-satisfaction while moving toward the wharf. The toaster oven, composite hockey stick and Internet are all fine inventions, but whoever dreamed up the pontoon—or “float”—should be celebrated on a coin or festive pennant.

It was also on the water where I felt most Northern, lighting out to Great Slave Lake guided by the Yellowknifer‘s senior editor, Mike Bryant. Eventually, we anchored near a rocky cove, the small waves drum-rolling against the side of the boat. It was a grey day, with temperatures dipping into the teens. My hoodie was pulled tight to my head and I shivered a little in the rising wind, which came hard across the lake. Mike handed me a fishing rod, which I cast awkwardly into the dark waters. In my life I will never be confused for an active angler, although it’s something I like to do whenever I find myself doing it. While I was staring into the opaque depths of the lake, the complications of the newspaper and my writing life fell away, which was exactly how this sort of thing was supposed to work.

This reverie lasted but a moment before my line shook violently. The rod bowed like a question mark and its spinner made a hissing sound. Mike shouted things like “Steady!” and “Hold it!” and “Ease off” and “Now stop easing!” but I was already too consumed by the drama of what was happening: I was raising a strange creature out of the unknown, which, in that instant, I understood to be one of the great things about angling. Geese shot and chickens chased across a yard are OK, but pulling a creature from darkness is something else entirely.

The line hiccupped a few times as I fought with the fish, and then Mike helped me pull it out of the water—a 10-pound monster of a northern pike (Northerners call them “jacks”). It was mysterious, prehistoric, oily and easily the biggest and most impressive fish I’d ever caught. Mike unbarbed the hook and then handed the jack to me. It lay heavy across my arms, and once cameras were drawn and shutters clicked, we turned the boat around, cinching our hoodies tighter to our chins. The wind howled and the motor roared. Finding shore, the land felt familiar, not strange. Finally, the North was no longer a concept, but a place.