How do you make math fascinating?

Book review: How Not To Be Wrong, by Jordan Ellenberg 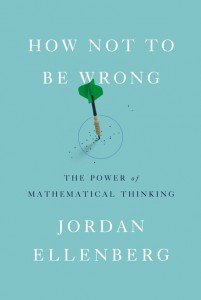 HOW NOT TO BE WRONG: THE POWER OF MATHEMATICAL THINKING

There’s little objectively sexy about math. With its flummoxing sine curves and its formulae written as if in ancient cuneiform, the subject has driven countless people to such frivolous pursuits as writing and journalism. Even the stand-up comedian Louis C.K. recently took to Twitter to rail at the way public schools were dryly meting the subject out: “My kids used to love math,” he wrote. “Now it makes them cry.” But Jordan Ellenberg, a professor at the University of Wisconsin, has positioned himself as math’s Malcolm Gladwell with this crystalline, eminently digestible book. (It doesn’t hurt that the drawings therein are charmingly amateurish, as if scribbled on a napkin during animated repartee over cocktails.)

“Mathematics is the extension of common sense by other means,” Ellenberg writes by way of opening thesis, and the book becomes a wide-ranging treatise in how math is about the choices we make, and how it relates to our political and cultural lives. In one breathtaking, arcing riff, for instance, he begins by asking a simple question—should you play the lottery?—and then passes through debates over the existence of God, the Pentagon Papers, train tracks, Winston Churchill and satellite error codes, before settling back to the suddenly profane-feeling question of whether or not Powerball is a worthwhile venture. Context, not calculus, is his cathexis.

But what of its titular promise that with math, you will never be wrong? Well, this is less an instruction book on opening one’s mind to infallible logic, and more a guide to picking the right kind. But even this he illustrates with aplomb, noting that Francis Galton–a pioneer of so many major statistical theories–also just so happened to have inspired the Nazis by founding the field of eugenics.

The biggest takeaway of the book, then, isn’t that math is always right—but that good math is in the choosing of the right kind of math. Math isn’t one and one making two, it’s in the whys and wherefores of that. “Wrongness is like original sin,” Ellenberg writes. “We are born to it and it remains always with us, and constant vigilance is necessary if we mean to restrict its sphere of influence over our actions.”

Books like Freakonomics or Gladwell’s Outliers became phenomena not simply by articulating tough conceits in accessible ways, but through tours-de-force of intellectual breadth that made the reader feel smart for coming along for the ride, like a crossword you happen to know all the answers to. Through its asides and cameos—a pinch of Pynchon, a nip of Nader—Ellenberg makes math’s curvy graphs start to look a little more attractive.