A Pulitzer Prize winner, Stephen Greenblatt, argues that Shakespeare understood how those unfit for political office gain and hold on to power 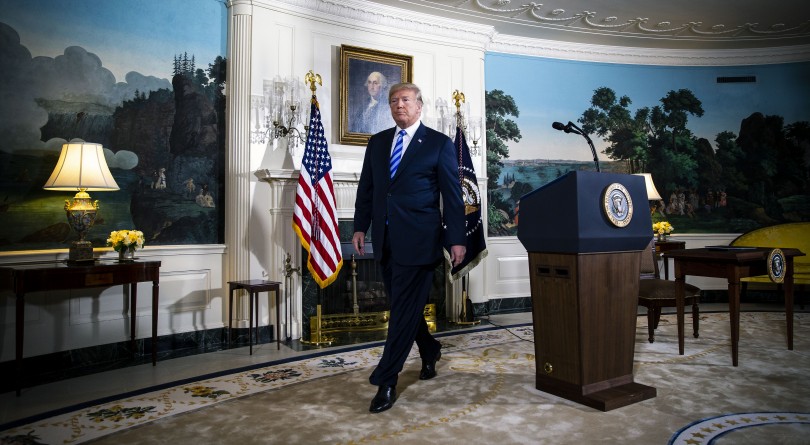 U.S. President Donald Trump departs after speaking during an announcement in the Diplomatic Room of the White House in Washington, D.C., U.S., on Tuesday, May 8, 2018. Trump said the U.S. will withdraw from the landmark 2015 accord to curb Iran's nuclear program and that he would reinstate financial sanctions on the Islamic Republic, casting the Mideast into a new period of uncertainty. Photographer: Al Drago/Bloomberg via Getty Images

In the late summer of 2016, the eminent American literary historian Stephen Greenblatt found himself in a verdant garden in Sardinia, feeling increasingly apprehensive about the upcoming U.S. presidential election. The author of the Pulitzer Prize-winning The Swerve: How the World Became Modern decided he should write something about his fears, but exactly what didn’t become clear until after they were realized that fall. A lifetime of teaching Shakespeare soon provided the answer though. As Greenblatt, now 74, watched the Trump presidency unfold in its tragicomic way, a seemingly endless series of parallels from the Bard’s plays began “rattling around in my head,” he says, and eventually inspired Tyrant: Shakespeare on Politics.

Q: Let’s talk about these parallels between Shakespeare’s time and place and yours. You found quite a few.

A: Oh yes! For better or worse the pleasure of my book depends on the eerie and uncanny collection of echoes that comes to mind—which I hope does happen when you read it.

Q: There’s the fear of foreign threat, fear of the minority fifth column within, and fear of religious fanaticism; there’s rumour—the fake news of its day—running rampant. You also point to Shakespeare describing a lust for power rooted as much in the desire to crush enemies as in any positive political aims. Do you see all that now?

A: I think that is the case. Everything I say in my book is true; I don’t have to manipulate the plays to show how they make a contemporary statement. Shakespeare’s era did have an intense fear of terrorism, domestic and foreign, inspired by religion. After all, there was an attempt to blow up the entire government in 1605 [with the Gunpowder Plot] and there were constant fears of assassination. It made the government repressive and the population anxious. Even more closely parallel is the decision by a plutocrat, a member of the elite at the highest level, that is to say Richard, Duke of York, to manipulate populism by inciting a nationalist uprising that attacks education and law and dreams of making England great again. That’s not me, that is Shakespeare’s account of York and Jack Cade in Henry VI, Part 2.

Q: Your whole first chapter is about Shakespearean misdirection, the “oblique angle” that a cautious writer had to take to approach political discussion in Elizabethan days. So, Shakespeare set his most political plays in the far past or in faraway places like Rome. And you follow his example all the way through: in a book that screams “Trump” on virtually every page, you never mention his name.

A: Shakespeare was cautious. This was a man who wanted to keep out of prison and keep his ears. I think it’s reasonable to want to avoid prison and keep your ears on your head.

Q: Indeed, but you don’t need to worry about that. So, were you paying a Shakespearean tribute, or trying to make your readers think a bit more deeply?

A: More the latter; well, maybe both. But first of all—and this will sound maybe fatuous—I hope that the book will outlast the current regime, the way that Shakespeare’s take outlasted his and many other regimes. What’s interesting about what Shakespeare did, and the peculiar angle from which he came at it, was he managed to make gold out of what looked like a terrible dilemma—how to address things that really mattered in his dangerous world. The issues I’m talking about extend considerably beyond, obviously, this [American] regime to many others in the contemporary world, including ones that are even worse than ours are. But also, Shakespeare is talking about things that are problems of our species, how we organize ourselves and society over a very long period of time. The problems we continually run into include the kind of personalities that emerge to take power, and he’s interested in how you deal with this and avoid dealing with it if you can. So that’s part of the reason for my coyness.

Q: You’re saying the Bard, too, has an idea of timelessness? There’s something human he wants to write about in these plays?

A: Yes, timelessness and repetition. It’s always a fantasy to think that what is going on now is going to go on forever. You might have thought, when Obama was president, that some version of his politics would continue forever, but it’s just not true. Things have ways of coming back. You think you’ve settled something, and it comes back. Shakespeare was interested in what to do in those circumstances. He keeps coming back himself and experimenting with different scenarios for this problem.

Q: Shakespeare is always relevant, of course, but aspects of his work rise and fall with the times. Do you think his history plays are having a particular moment now?

A: A couple of years ago, I had a strange conversation with a very nice Iranian woman who had invited me to talk on Shakespeare for the first, and possibly last ever, Iranian Shakespeare Association meeting. I was in Vermont and she phoned me from Tehran—I assumed, naturally, that many people were listening in on this conversation on both sides—and I asked her what she liked to teach and what her students liked in Shakespeare. And she said, “Oh, the history plays.” I didn’t say any more then but I thought for a long time about why that should be the case, medieval English history in modern Iran. Actually those plays are remarkably interesting takes on what it’s like to live in a complicated political situation.

A: I’ve seen many productions in period or modern dress, or both of them combined over the years. I remember one that was modern not just in dress—the English soldiers going off to France had a huge banner that said, “F–k the French,” or was it, “F–k the Frogs?” But it’s not just the history plays that bring the audience’s worries to the surface. I did see the Julius Caesar at Shakespeare in the Park [in New York] last summer. That was in modern dress with extremely contemporary references that actually got disrupted by [pro-Trump] protesters, a big ruckus made about it. The histories and the Roman plays can both be enormously forceful whether in modern or in period dress.

Q: Complicity seems to have been of intense interest to Shakespeare. Tyranny really needs its helpers, doesn’t it?

A: He’s fascinated by “Why?” Very few of the enablers, in Shakespeare or in real life, are deluded or under illusions about the character of the person that they’re enabling. They do see. Either they see with a certain kind of dismissive contempt or they see with more alarm about how dangerous the person is. But they nonetheless go ahead and enable the person to rise to power. And the question Shakespeare asks himself repeatedly is, how can this be. Why would people, if humans are rational actors, collaborate in something that is not in their interest let alone the rest of us. Part of the answer is they are not rational actors. But the answer lies also—Shakespeare is quite canny here—in the extremely rich variety of ways in which you can delude yourself into thinking this is to your advantage. You’re going to get something from this. You’re going to succeed where everyone else has failed. It doesn’t happen that way, and again and again and again and again he shows what their fates are, sooner or later.

Q: To remove all doubt about contemporary echoes, you point out a few would-be tyrants seeking foreign help—reminiscent, you write, of an American politician turning to Moscow—and actually locate a germaphobic example.

A: I just had to quote Coriolanus. When his fellow elites are trying to mould him into a more successful politician, they tell Coriolanus to “speak fair” to the plebeians. Well, I’ll do it, he replies, but only if you first tell them to brush their teeth.

A: Yeah, on what happens when the ruler begins to show signs of extreme instability, impulsiveness or madness. And on this Shakespeare is rather pessimistic. The royal courts are depicted very differently in Lear, where there is nothing to be done given the general corruption, and in The Winter’s Tale, where there are glimpses of resistance, officials who feel that they can speak out to King Leontes. But he’s gone mad and they don’t deal with it very well, because Shakespeare sees that it’s extremely difficult to do anything about it then. He puts his real alternatives on how to avoid the madman situation in two Roman plays. One is assassination, in Julius Caesar, where he very clearly suggests that assassination—even for idealistic reasons, for the good of the state— is actually a terribly bad idea. It will probably bring on the things the idealist thinks he’s going to stop. Shakespeare’s alternative to that was to turn to a very low-level political insistence on procedure, on the importance of observing the rules.

Q: That’s Coriolanus. Is that the single political play that stands out the most today?

A: It offers the most, at least in terms of hope. It’s a strange play to offer hope, because it’s been beloved of both the extreme right and extreme left, which are not sources of hope. Coriolanus is the play that explores something like democratic rule or at least shared rule, under enormous pressure. And I do think it is the work in which Shakespeare—very strangely because he didn’t live in such a world himself—most tries to imagine having an elective system and how you might be able to use that to escape the worst consequences of a bad ruler. And in the end, it’s the tribunes, minor politicians and no saints, whose insistence on proper procedure saves the state from Coriolanus. But that’s not the play that dominates my brooding about where we are now.

A: No, the one that keeps coming back to me, I’m sorry to say, is Richard III, and how someone catastrophically unfit to be the governor of a great state comes to power through the complicity of a variety of people. Nothing lasts forever, and Richard did fall. But it shouldn’t have happened at all. The play is full of horror at that fact. I hope that’s not where we are now. I don’t think that’s where we are now, but I think it’s a warning.