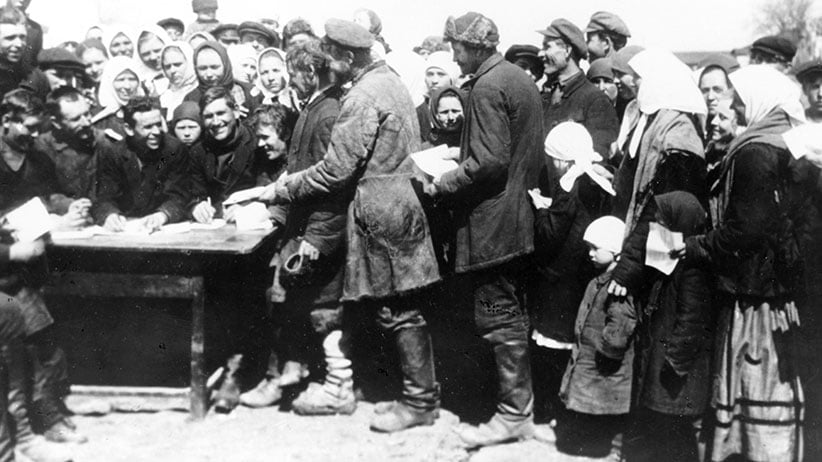 Registering for the collective farm, soviet union, in 1929. (Sovfoto/UIG/Getty Images)

American journalist and academic Anne Applebaum’s professional focus has always been Eastern Europe since the collapse of the USSR in 1991. She is the author of the Pulitzer Prize-winning Gulag: A History (2003) and Iron Curtain: The Crushing of Eastern Europe, 1944–56, which won the Cundill History Prize in 2013. Applebaum, 53, also created Democracy Lab in conjunction with Foreign Affairs magazine, a website centred on nations transitioning to democracy—and on authoritarian threats to that transition, especially disinformation and propaganda campaigns. Her latest book, Red Famine: Stalin’s War on Ukraine, gathers almost all the threads of her past work as she details the 1932 to 1933 Holodomor—from the Ukrainian words for “murder by starvation”—and the continuing campaign to suppress its history and distort its meaning.

Q: This is a very precisely crafted book. You want to establish the facts of the Holodomor in a charged environment in which it’s as much political lightning rod as settled history.

A: I wanted this to be about history, not contemporary politics. The actual facts of the story have been disputed in the past for political reasons, and there are still a lot of political implications to it, so we can talk about that relationship to contemporary events. But the timeline of the 1930s should not be in dispute any longer. There is no doubt about what happened.

Q: And that, essentially, is that whatever evils befell the other parts the Soviet Union under Stalin in 1932-33, the Holodomor was real, a deliberate state act, deliberately directed at Ukrainians as a political and cultural entity.

A: It was not the intent to kill every single Ukrainian, but it was an attempt to kill a lot of Ukrainians. And it was part of a wider attempt—alongside the mass arrests of Ukrainian intellectuals and leadership—to destroy the possibility of a sovereign Ukraine.

Q: Part of the history is that the Holodomor didn’t come out of the blue. There has been a long continuity of attitude in Moscow—a contempt for Ukrainian nationalism—running through the Czarist, Soviet and post-Soviet eras. One of the more striking instances of continuity was Lenin sending in Russian troops in Ukrainian disguise during the Civil War, which almost a century later became a Putin tactic.

A: Several people have picked up on that. There were a couple of other similar moments, various tricks meant to undermine Ukraine, including Stalin at one point setting up mini-republics in Donbass, Odessa and elsewhere as a way of distracting and disorienting Ukraine. There is a kind of KGB playbook based on previous KGB practice and before them NKVD and Cheka and even Czarist tactics, used to manipulate minority nationalities. There’s a very old tradition of doing that in that region.

Q:  The step-by-step process of the famine began with the forced collectivization of agriculture and the massive grain requisitions.

A: Collectivization and food seizure caused a lot of chaos and destruction in 1929 and 1930. By 1932, there was beginning to be hunger all over the Soviet Union. There was anger, revolt inside the Communist party, rumours that Stain’s wife’s suicide was connected to the collectivizing debacle—lots of pushback. And it was exactly at that moment in 1932 when Stalin made decisions that deepened the famine in Ukraine–seizing more grain, more food of any kind—making it harsher than elsewhere. As historians put it, Stalin decided to “use” the famine to essentially murder a lot of Ukrainians.

Q: By the summer of 1933 he’s doubling down in the repression of the Ukrainian cultural and intellectual elite, the other half of a double-pronged attack. So even when terrible things were happening elsewhere, they were worse in Ukraine?

A: There’s a separate set of arguments to be made about Kazakhstan, where there was also a terrible famine. But Ukraine in 1932 is one of the first instances of deliberately organized artificial starvation ever to take place in Europe. It was a new answer to, how do you get rid of a people you don’t like?

Q: The famine victim estimates once varied wildly, but the numbers are now fairly well-established: five million people across the USSR in 1932-33 but almost 4 million of them in Ukraine.

A: Those are the numbers that have been put together by a team of Ukrainian demographers who spent several years going through local records that they think weren’t falsified. Things like, what was the recorded population of village X or town Y. The demographers compared what would be the expected death rate with what were the actual death rates. So these are the best and most accurate numbers that we have.

Q: Moscow’s paranoia about the potential threat of Ukrainian nationalism kept up into the ’70s and the ’80s. But it’s never really gone away, has it?

A: Perhaps (it did) in the immediate post-collapse era—in the 1990s, when people like Boris Yeltsin were much more worried about rescuing Russia. Since Putin and the others around him came to power, though . . . as we talked about, the KGB has a playbook, an attitude that they inherited. In their case you can see very clear patterns of thinking and speaking about Ukraine in the same way their predecessors did. Putin has said in public that Ukraine is not a real state. The Russian invasion of Crimea in 2014 and then the invasion of eastern Ukraine were very much KGB operations right down to the denial that it was happening while you watched it happening, and the massive disinformation campaign, like the creation of fake separatist movements. At the very deepest level, it’s Putin’s paranoia about Ukraine that explains why he reacted so violently in 2014 to the Maidan revolution.

Q: What was it about Maidan that brought on the Russian reaction?

A: My guess is that Putin looked at that and saw exactly what he’s afraid of in Russia, namely lots of young people waving the EU flag and talking about anti-corruption and the rule of law. And he thought, that’s the kind of movement that could destabilize Russia itself. Russians don’t see events in Ukraine the way they would see them further afield, even in Poland. Ukraine is close enough to home, similar enough in culture—to the extent there is a general dismissal of the idea that Ukrainians are a separate, non-Russian people. So it felt to Putin like a threat to his form of power, an oligarchy dictatorship. That was why he reacted as he did and conducted those two invasions, which were tactically successful but strategically disastrous for Russia. They created the sanctions and the Western backlash and, for the first time in history, a united Ukrainian resentment of Russia.

Q: One of the significant long-term effects of the Holodomor was the influx of Russians into Ukraine.

A:  The regime imported peasants directly from Russia in the immediate aftermath of the famine to fill the empty villages and to till the fields, literally. It’s really not clear how many of them stayed—we know quite a few left because they were so appalled by what they found there. But it’s certainly true that in the subsequent decades, eastern Ukraine and other parts hit hard by the famine were very heavily Russified, both culturally and ethnically.

A: Not entirely but majority Russian-speaking, and the state administration was mostly Russian-speaking. Basically, in Soviet Ukraine if you were an ambitious person, you learned Russian because that was the path to higher education and a better job.

Q: Is that changing now?

A: Absolutely changing. One of the most striking effects of the war in Ukraine has been the Ukrainization of Kyiv. Ten years ago if you’d asked people there, where most everybody speaks both languages—I’ve been to public meetings where one person stands up and speaks Russian and the next person speaks Ukrainian and it didn’t bother anybody except me because I don’t speak Ukrainian that well—what their main language was, more than half would have said Russian. But a recent survey showed that has flipped. Now well more than half say they speak Ukrainian primarily.

Q: The USSR denied the Ukrainian Famine at the time and kept that up until the end. The wall of silence started to crumble in the immediate post-Soviet years, but by 2016 the Russian state was back in full denial that Holodomor ever happened, at least not in the deliberate way you establish in your book.

A: Russia has put a lot of diplomatic effort into making sure that the word genocide is never attached to the Ukrainian famine. You can again find Russian historians and Russian-backed websites denying that anything happened at all then or that there was anything special about the Ukrainian Famine. After a period of time when you could at least discuss it with Russian historians, some are back to the original Soviet position—if you talk about the Ukrainian Famine, you’re a Nazi.

Q: You connect what you call contemporary Ukrainian political pathologies to the Holodomor: distrust of the state and its agents, toleration of corruption, political passivity. Why?

A: If you think back to not just to the famine but the destruction of the elite and its replacement with a Sovietized, Russified and politically cowed elite, then you can see how distrust of the political class makes sense. If all you have, generation after generation, are people whose loyalty is really to Moscow, not to Ukraine, the result is political alienation. The famine was also a source of political passivity. There was resistance to Soviet rule and, several times, peasant rebellion, in 1918 and 1929 and 1930 again. After 1933, no more. People remembered what happened and they were frightened.

Q: You end on a note of hope. The forces of denial are not prevailing among Ukrainians, who now know a lot of their history and are free to talk about it.

A: The famine is a tragic story, a terrible story to read. There aren’t any happy lessons in it. But that doesn’t mean that the story of Ukraine itself has to be a tragedy. Ukraine had a rebirth in the ’90s. It has begun to assert itself as a state that at least wants to be democratic, that has an incredible talent for creating civic culture and cultural institutions even if it’s not so good at creating state institutions. Ukraine and Ukrainians may be at the beginning of a better story, not just at the end of this tragedy.