How to bounce back from disaster: book review 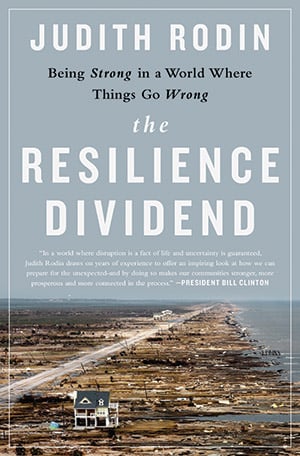 THE RESILIENCE DIVIDEND: BEING STRONG IN A WORLD WHERE THINGS GO WRONG

With constant terrorist threats, Islamic State beheadings, Ebola and extreme weather, no wonder it feels as if humanity is under siege. But there is hope, asserts Judith Rodin. It is derived from our tremendous capacity for resilience: “to prepare for disruption, to recover from shocks and stresses, and to grow from a disruptive experience,” as she defines it.

Given that we can learn (at least, in theory) from drastic events such as 9/11, hurricane Sandy and the SARS pandemic, we adapt and transform. Resilience may not be an inherited characteristic, yet if the 20th century has shown anything, it is that humanity knows how to bounce back. That, suggests Rodin, is the “resilience dividend.” Or put another way, the trick is to figure out how to overcome our penchant to be apathetic until something really bad happens; in Rodin’s thinking, we need to install the traffic signal at a busy intersection before a pedestrian crossing the street is killed, not after, as is too often the case.

A research psychologist, Rodin is president of the Rockefeller Foundation in New York City, a position she has held since 2005. A few weeks after hurricane Sandy destroyed parts of New York state, Gov. Andrew Cuomo appointed her chair of the NYS2100 commission. Her mission, and that of the task force, was to figure out how to prepare for the next storm and rebound more quickly and efficiently; in other words, to put the resilience dividend into action.

Her study is framed around five characteristics of resilience, and she uses these as a template to examine responses to various crises. Looking at the disaster at Japan’s Fukushima nuclear power plant following the tsunami of 2011, she points out how “groupthink,” rather than employing a diverse perspective, contributed to the catastrophe. Seeing every problem through the same lens, the plant’s officials simply ignored the warning signs.

Despite being immersed in academia for much of her career, Rodin writes in an easy style. Drawing on a number of inspiring stories—like the remarkable transformation of Medellin, Colombia, once the drug and murder capital of South America, yet a relatively peaceful city now, recognized for its innovation; or Village de L’Est, a community of Vietnamese Americans in a district of New Orleans that rebuilt after hurricane Katrina—she shows how resilience can be achieved through “readiness, responsiveness and revitalization.” Upbeat and optimistic, this is not a book for cynics. Rodin marshals a strong case that the resilience dividend is “real and achievable,” and if followed it can make a difference in the lives of millions of people the next time disaster strikes.