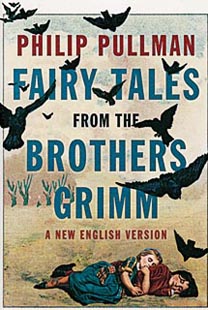 Despite their perfect names and that almost omnipresent sibling theme—just how many fairy tales deal with the tribulations of bands of brothers?—Jacob and Wilhelm Grimm were real people and actual brothers. And 200 years after the first publication of their collection of folk tales, they remain our main source—however mediated by Disney—for ancient stories that have never lost their magnetic attraction. Fairy tales, in fact, may be hotter than ever, given their eruption into contemporary pop culture, including three TV series (Grimm, Once Upon a Time and Beauty and the Beast) and recent movies derived from “Little Red Riding Hood” and “Snow White.” Not to mention Angelina Jolie perfectly cast as an evil fairy godmother right out of “Sleeping Beauty” in the upcoming film Maleficent.

Pullman, author of the brilliant Golden Compass, is an excellent storyteller himself. The finest touch he brings to this collection of 50 of his predecessors’ tales—some as familiar as “Rumpelstiltskin,” others as deservedly obscure as the peculiar “The Girl With No Hands”—is to leave them as stripped-down narratives. Pullman avoids what he calls the “twaddle” of Freudian, Jungian, Marxist, structuralist etc. analyses, leaving them tales of people (archetypes, really) triumphing (usually) over an astounding array of human wickedness. In the original “Snow White,” often held up as a prime example of the heaping-abuse-on-stepmothers sub-genre, it’s Snow White’s own mother who is so consumed with envy at her child’s beauty that she wants her dead and who gleefully eats, dredged in flour and nicely fried up, what she believes to be Snow White’s lungs and liver.

If there is a universal message in the Grimms’ collection, it’s that the world is full of nasty creatures out to get you, but if you are good-looking and fortunate enough—loyalty, intelligence and basic decency help a lot, but beauty and luck are the killer apps—you will triumph and get to watch your tormenter forced into red-hot iron shoes and made to dance until she dies. No wonder children have always loved these stories.