How to talk to your kids about Donald Trump

A bestselling author of children's books explains how he'd explain politics to kids, and whether such books should be so partisan 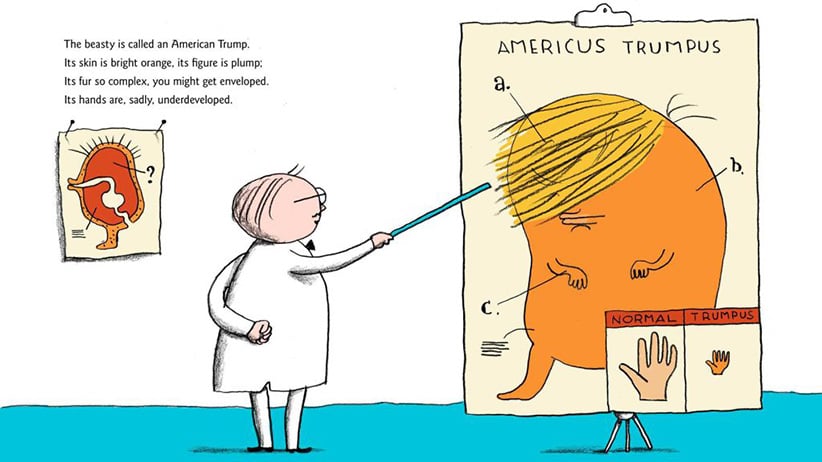 An image from “A Child’s First Book of Trump.” (Simon & Schuster)

“The beasty is called an American Trump. Its skin is bright orange, its figure is plump.” So begins a new children’s book titled A Child’s First Book of Trump. The story, released July 5 by Simon & Schuster Books for Young Readers, teaches children to ignore bullies who yearn for attention. In Canada, Donald Trump is equally notorious. Maclean’s spoke with Eric Walters, author of national bestselling children’s books, to find out how Canadian parents and teachers can explain America’s rowdiest politician to kids.

A: I think they can understand the anger and the name-calling. That part’s pretty obvious to a kindergarten kid. They would pick it up. There’s no question. Kindergarten kids can still be bullies.
I’ve talked to 100,000 kids, and I do get political. I talk about the refugees we let in, gun control. The line I’ve been using for the past six months is, “We’re Canadians. We’re better than the Donald Trumps of the world.” Grade 3s clap. They all know about him. They know he’s out there.

Q: Should parents and teachers teach children about politics?

A: Kids need to know more than just about unicorns and zombies and vampires. The rhetoric that’s coming out is anti-black, anti-Mexico, anti-diversity. [Adults] definitely need to put it in context. I’ve talked to people who are literally struggling to sleep because they’re anxious. Children pick up on that. Talk to your kid. Tell them, “this is what’s bothering me.” Explain that what’s going on is unacceptable.

Every kid Grade 6 and up carries a cellphone—with that they can access the world. They are the most connected, aware generation that’s ever existed. You can’t protect them by pretending it doesn’t happen. Kids aged seven and eight are going to start asking questions.

Q: How can adults explain Trump to kids?

A: How do you explain a sociopath to an eight-year-old? That’s a hard one. A mean man. A non-Canadian. Darth Vader. Actually, can’t you picture Darth Vader with that hair? But in the end, good does prevail. Show them there are good parts of life. Show them Michelle Obama’s speech. You need to say, “but here is what good people do. Here in Canada, we’re different.” And we are different. Trump’s creating laws for crimes that don’t exist. We have Prime Minister Trudeau in the gay Pride parade waving a flag.

Q: How would you title a children’s book on Trump?

A: “Hate You Forever.” “Where the Wild One is.” “Make Way for Donalds.” “The Nut in the Hat.” “The Nut in the Wig.” “Donald Trump and the Terrible, Horrible, No Good, Very Bad Day.” Those are the possibilities.

Q: Can you describe what the book would be like?

A: It’d definitely have to be a picture book, definitely with his vibrant colours. Rhyming couplets. Bold pictures. It has to be silly. He doesn’t mind people hating him. Hate is what he does. It’s people finding him silly that would bother him more than anything.

Q: Should children’s books be partisan?

A: They are by nature partisan. Dr. Seuss had a lot of political books. Yertle the Turtle, most of his books, they’re about diversity, inclusion. The Lion, the Witch and the Wardrobe is a very Christian book. The message [in a Trump book would be], “the silliness is going to end. This is going to end.” You’re not trying to sway the children’s votes. You’re trying to appease them. I’m a big believer in bibliotherapy.

Q: You often write stories about personal experiences. Would you be willing to spend time with Trump in order to write about him?

A: I would love to spend time with him. I would tell him what I think. He would take me out in 30 minutes.

Q: What kinds of books do you think Trump reads himself?

A: I don’t think Trump reads. If he does, my guess is he’s reading autobiographies of … I wonder if he’s read Mein Kampf.

Q: How would a children’s book on Donald Trump end?

A: The happiest ending would be him not getting elected. Wouldn’t it be something if Trump could become a good person? If the scared little boy could find his way home? Even bullies need love.