Humour in the cheerless chore of caregiving

A review of 'The Caregivers: A Support of Group's Stories of Slow Loss, Courage and Love' by Neil Lake 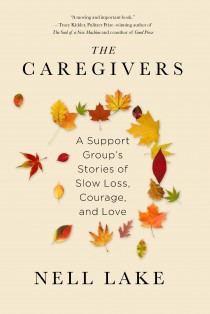 THE CAREGIVERS: A SUPPORT GROUP’S STORIES OF SLOW LOSS, COURAGE AND LOVE

If you’ve ever cared for a terminally ill, elderly loved one, you know the horror stories. You’ve got a long list of them yourself. How bad can it get? In Nell Lake’s book, one woman falls out of love with her husband when Alzheimer’s disease alters his personality. He’s verbally abusive. He keeps guns in the house. She admits him to a nursing home and considers divorce, but instead stops visiting him and becomes bitterly envious when her friend’s 52-year-old husband drops dead of a stroke. A dead husband? Some people have all the luck!

It turns out that knowing how bad it is for others is a great comfort in the cheerless chore of caregiving. The Pulitzer prize-winning Lake discovered this in 2010, when she started sitting in on weekly meetings of a support group for caregivers: husbands with cancer, mothers with dementia.

“Many members tell me privately that they find the support group helpful, in part, because they see others’ problems as worse than their own. They think, ‘I don’t have it as bad as she does,’ or ‘At least my mother is sweet to me,’ or ‘I’m grateful his mind is okay.’ ”

What makes the book stand out is Lake’s impeccable reporting. She’s like a lepidopterist netting with her tape recorder the rare and fleeting moments of humour that flit across the bleak landscape. One can only imagine the hours of drudgery that went into transcribing two years’ worth of intimate conversations, but the process paid off. There’s the married couple who argues which of them is hardest to get along with; the memory-clinic receptionist who calls to change the appointment time of the Alzheimer’s patient and gets mad when the patient forgets to write it down. There’s the botanist, Penny, whose office-door nameplate she devised herself: Penny Jessop, O.C., L.M.S. “The letters stand not for degrees, but for phrases her boss and co-workers have used to describe her: ‘Overcommunicator’ and ‘Little Miss Sunshine,’ ” writes Lake. Jessop’s sense of humour is raucous. Who knew that two pages of a mother urgently needing to go to the bathroom could be such a suspenseful and delightful read?