Book review: I Hate to Leave this Beautiful Place 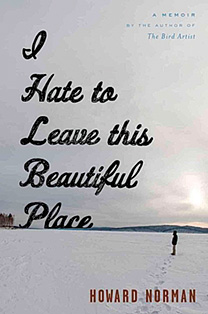 I Hate to Leave this Beautiful Place

What a striking title, capturing the regret most of us feel on the cusp of old age and the realization that we will surely die. The American writer Howard Norman is 64 and in his new memoir he certainly does reflect on dying and departure. He also writes of the beautiful places he hates to leave—several in Canada.

However, those haunting words come from a folk tale he recorded at Eskimo Point in 1980 when he was working for the Arctic Oral History Project. It concerns a soapstone sculptor who is turned into a goose by an evil shaman. When it is time for the flock to head south, he realizes he must join the other geese or perish. His lament is heard across the tundra: “I hate to leave this beautiful place. I hate to leave this beautiful place.” The unspoken lesson is that life requires us to do many displeasing things and, as Norman puts it, a “person comes to knowledge of him—or herself through indelible experience.”

In this slender, elegant book, Norman, who has twice been a finalist for the National Book Award (The Bird Artist in 1994 and What Is Left the Daughter in 2010) recounts five chapters in his eventful life, each involving indelible experiences, what he calls “incidents of arresting strangeness.”

He begins in 1964 at age 15, working at a bookmobile in Grand Rapids, Mich. Over the summer, he has his first sexual encounter; sees his estranged father on 11 occasions; writes, but does not mail, letters to 22 of his friends’ fathers, so strong is his desire for a male presence; and, perhaps most crucially, develops an affinity for waterfowl that forever sustains him.

He ends at age 56, a year after a poet who was housesitting his Vermont farmhouse brutally murdered her young son and killed herself, after hiding throughout his home 33 small black notebooks of “penetratingly grotesque” writings. The steps he takes to recover from this horror visited on home and family is reflective of a gentle and unusual man, so interestingly engaged in his life of indisputable strangeness.