Book Review: I Invented The Modern Age: The Rise Of Henry Ford 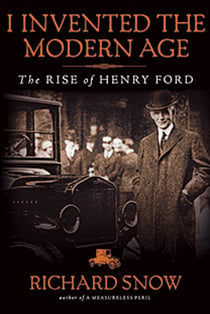 I Invented The Modern Age: The Rise Of Henry Ford

This excellent book is biography as pure literature: it calls on no new hoard of documents, nor does it reinterpret its subject, but it is content to acquaint the reader with an old story perhaps grown unfamiliar. Henry Ford might be one of the top 50 or so persons whose name would appear in a general history of mankind with Christ’s and Newton’s, but where amidst an academic history education would one bump into him? An undergraduate might easily find himself examining the life of a representative Ford Motor Co. immigrant worker, or researching the Model T’s effect on sex habits. Ford the man would appear on this scene only as a sort of impersonal vector of force, barely visible at all.

“Great man” history is still out of vogue. Maybe the name is the problem: the men who exert a huge personal influence on history are not always “great,” and the vindictive, cruel Ford, who lived long enough to build and virtually destroy a great industrial enterprise, is no exception. His own business and political ideas, such as they were, were bizarre as often as they were brilliant. Some of the key insights into mass production, which was at one time called “Fordism,” were borrowed from men he would dispense with like stripped screws.

His own most important contribution was his diamond-hard faith in the ability of the affordable automobile to change the world and create more demand for itself. His major early competitors all saw their products as luxury items. They competed to add creature comforts and new gadgetry; selling fewer units at a higher price markup only made their cars more effective as status signals. Ford, the man who thought history was “bunk,” was the only one who foresaw that the automobile wasn’t a toy; it was a technology platform that would change the face of the planet and rearrange the human race. Only someone at least half lunatic would have thought one man’s will was enough to make it happen.