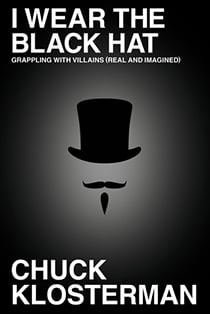 I Wear The Black Hat: Grappling With Villains (Real And Imagined)

A reader doesn’t have to like the answers provided by cultural critic, novelist and New York Times Magazine ethics columnist Klosterman to agree he asks really good questions. Why, in the pentagram of key characters in the Bill Clinton-Monica Lewinsky saga—the president, the president’s wife, the special prosecutor, the White House intern, the intern’s apparent but treacherous friend—does Clinton, who cheated on his wife, abused his power position with the intern and lied about it all under oath, have better press than the rest combined? Is what’s likable about Republican presidential aspirant Newt Gingrich—his willingness to promote bizarre ideas like moon colonization—also what makes him repulsive, both being rooted in his complete indifference to other people?

Not that Klosterman doesn’t have good, meaty answers, but they are liable to irritate people. Even more annoyingly, he’s happy to tell you why you are upset: because none of us like it when our settled, socially conditioned ideas (it’s a bad thing to lie under oath) clash with our instinctive emotional reactions. Two factors dominated those emotional responses in Clinton’s case. First, he’s handsome. Physical appearance matters enormously, but while we accept this intellectually, we try to deny it in the (ironic) name of fairness. Second, Clinton never gave his personal version of events: “Everyone’s obsessed with human sexuality, but no one wants to hear about it,” Klosterman writes. The others, with the exception of Hillary Clinton, became villains by never shutting up about it.

There is quite a lot of this sort of reasoning in Black Hat, including an explanation of how once-beloved football coach Joe Paterno carries more blame for the Penn State child sexual abuse scandal than the actual rapist, Jerry Sandusky. That is the prime case that leads to the author’s guiding rule: In any situation, “the villain is the person who knows the most but cares the least.” For every situation where that works splendidly (Paterno, O.J. Simpson), Klosterman provides one (Julian Assange, Satan) where it’s arguable and even offensive. Or maybe that’s the whole point of this endlessly thought-provoking book.