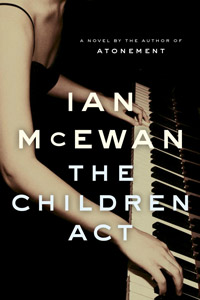 The curtain rises on a well-appointed London flat. Fiona Maye, a 59-year-old High Court judge, lies on a chaise longue downing her second Scotch and water while contemplating a third. The alcohol is a shock absorber; Fiona’s husband of 35 years, a professor named Jack, has just upended their solid, if dull, marriage by telling her he wants to have an affair.

The small scene of domestic disquiet, at odds with McEwan’s tendency to virtuoso, suspense-laden first acts (as seen in A Child in Time and Enduring Love) sets the stage: Jack exits to pursue a 28-year-old statistician as the narrative shifts to microscopic examination of Fiona’s work in family court adjudicating divorces, custody battles and the occasional King Solomon-like decision. The judge, who prides herself on bringing “reasonableness to hopeless situations,” is unmoored by personal crisis as she faces one of the most complex decisions of her career: a hospital petition against Jehovah’s Witness parents who refuse a life-saving blood transfusion for their 17-year-old son. Emotion colours Fiona’s judgment after a hospital visit to assess whether the boy, Adam, is competent to refuse medical care. The scene is a tour de force: a childless judge questioning her life decisions spars and then bonds with a brilliant, confident boy over music and poetry. Fiona’s decision on Adam’s fate sets in motion a cascade of quietly catastrophic, unpredictable events knit into a masterful conclusion.

It’s instructive that the title of McEwan’s 16th novel is taken from legislation stating that “when a court determines any questions with respect to the upbringing of a child, the child’s welfare shall be the court’s paramount consideration.” The life-and-death decision at its core provides a springboard for erudite discussion of religious dogma, secular dogmatism, as well as the limits of law and love. It’s gripping stuff, elegantly tackled. Yet a clinical detachment prevails, one not aided by the fact that Fiona, the novel’s most fully developed character—a woman with a “powerful grip on what was conventionally correct”—is a bit of a bore, even at her most self-revelatory. Still, McEwan offers an intellectually bracing dive into a deep, cold, crystalline pool only murky at its very bottom. Any similarities to reading brilliant and compassionate, if bloodless, legislation is clearly intentional.