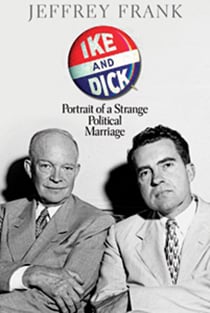 U.S. presidents aren’t known for being buddies with their vice-presidents, but the relationship between Dwight Eisenhower and Richard Nixon was especially distant. The former general repeatedly considered dropping Nixon from the ticket, and may have scuttled Nixon’s first presidential campaign by implying that he didn’t help with policy decisions. Yet as Frank recounts, the two men developed a grudging relationship based on “if not affection, then whatever it was that they alone shared.” They even wound up becoming relatives when Nixon’s daughter married Eisenhower’s grandson.

The book gives us a younger, more likable Nixon than we usually see, more friendly to civil rights than the president, who tried to evade the issue until it became impossible. We also see Nixon’s “tricky” persona in the making: when he was in danger of being cut loose in 1952, he used the power of television and class resentment to wriggle his way out of trouble in the immortal “Checkers speech.”

Because most of the book is from Nixon’s point of view, it doesn’t give a clear understanding of Eisenhower’s political goals. The Ike in Ike and Dick is almost a throwback to the way he was portrayed in the media of the time, a befuddled old man who didn’t take anything seriously except golf. But by showing us Nixon’s struggle to maintain power in a somewhat hostile administration, Frank allows us to see how Nixon developed the techniques he would use as president, and perhaps a bit of what he learned from Ike: how to be, as Nixon put it, “a ruthless executive who often used others to carry out unpleasant assignments.”