In conversation with Molly Ringwald

On writing her first book of fiction, her love of Sarah Polley and what she really thought of her 'Pretty in Pink' prom dress 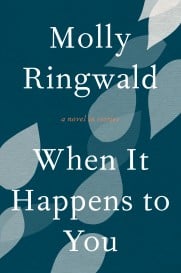 Molly Ringwald was the teen queen of the ’80s.  In coming of age dramas such as Pretty In Pink, The Breakfast Club and Sixteen Candles, the actress served up scenes layered with pouty, pensive, poignant moments which went on to redefine the notion of the screen teen. Her copper-coloured hair and astute, emotionally wrought line delivery (remember the way Ringwald coughed up “if somebody doesn’t believe in me, I can’t believe in them” in Sixteen Candles?), prepared Hollywood for a new generation of young, indie leading ladies, long before the Winona Ryders and Chloe Sevignys of the world came to roost.

At 44, Ringwald is once again trying to break new ground. The L.A.-based mother of three recently tried her hand at novel writing—her first book of fiction, When It Happens To You is currently on shelves—and is slated to release an album of jazz covers. While doing the rounds for her new book, Ringwald spoke with Maclean’s about her writing process, her love of Sarah Polley and her disdain for Paul Ryan.

Q: Every character in your novel is struggling with internal conflict. What would you say instigates most of it?

A:  Betrayal. It is such a universal and rich subject. Being a woman and being the age that I am—I see it all around me. So I thought it was interesting to write about it from so many points of view from people who are experiencing it from all sides.

Q: How much of your main character—Greta—is connected to you and your circle of friends?

A: I have met a few Gretas but most of the women that I know have careers. But there are a lot of stay-at-home moms that are like Greta in the world. They all seem to have an agreement they make with their spouse. It’s a secret deal they’re making when they decide to stay home and take care of the kids all day. When that deal is broken by betrayal, it is so tough. To have the rug pulled out from under you—especially when all of your eggs are placed in one basket—makes dealing with a cheating spouse a lot harder.

Q:  One of the characters in your book is a six year-old boy named Oliver who is questioning his gender. While taking your daughters and son to the playground, have you witnessed children going through the same thing?

A: Yes. Oliver was actually inspired by two different kids I knew. Both have two different mothers, who handled the situation in completely different ways. The one child who was [struggling the most] was more obviously transgendered —I’m absolutely positive he will grow up and live as a woman. His mom was not on board at all with him wanting to be a girl. It was heartbreaking. I sympathized with her a lot even though I didn’t necessarily think that she was making the right choices for her son. The wheels started spinning for Oliver when I thought about what I would feel like if I were his mom.

Q: What kind of reactions have you been getting from parents?

A: I received a really amazing response from the author of the book, Prodigal Sons. A movie [adaptation] of it came out a couple years ago. It’s about a transgendered woman who was originally a football star in high school. He was a man who ended up becoming a woman—now she’s one of the most beautiful women I’ve ever seen. She was given a copy of my book and was so positive about it. She said that I completely got Oliver’s character and was so happy that I had written his part from his mother’s point of view.

Q: The ending of the book has received some critical debate. Was it tough to wrap up so many stories concisely?

A: Yes. I stand by it. It couldn’t be an overwhelmingly happy ending but I didn’t want to end it in a bleak way either.  Striking that balance and leaving it open-ended was necessary. Who knows if these people are actually going to be able to make it?

Q:  In an interview with the New York Times, you mentioned that The Breakfast Club had a few scenes pulled out of the original script.  Was there something that you loved from the film that was cut out?

A: I remember the dream sequence was a lot longer, and more surreal. I really loved it. Our character’s minds were going in all these weird places and imagining things because of the boredom of the detention. They had me in a wedding dress, like [Claire] was getting married. Also: there was a whole speech from Claire explaining why she’s in detention.

Q: The characters of Claire from Breakfast Club, Samantha from Sixteen Candles and Andie from Pretty In Pink constantly get a lot of play on fashion blogs. How much of your personal style was brought into the characters?

A: A lot. I influenced all of their looks. On Sixteen Candles I went out with a costumer and bought all my clothes myself, right on Melrose. For Breakfast Club we had long discussions on what [Claire] would wear but when the clothes actually showed up in Chicago—they looked very different from what we had talked about. So John Hughes and I went out in Chicago and bought a whole new bunch of outfits for her. The only thing I wasn’t too thrilled about was that prom dress for [Andie] in Pretty in Pink.

Q: You’ve just recorded a jazz album of standards. What was your criteria like for choosing tracks?

A: I chose songs about love and I tried to pick songs that you haven’t necessarily heard covered a lot.  Songs like The Very Thought of You, Exactly Like You and one called You Fascinate Me So as well as a song called Ballad of a Sad Young Man—which was recorded by Anita O’Day and Nina Simone.

Q: You made a public service announcement against Prop 8 and have been a grand marshal at LA’s Gay Pride Parade. What do you think about Paul Ryan’s stance on marriage?

A: I obviously don’t agree with him—he’s completely wrong and I think that history will prove him wrong. It’s hard for me to relate to somebody so backward. It’s like somebody saying that they believe in slavery. It’s just as bad. We’re still in that place where the tide is shifting and I really do think that it is.  We still have a ways to go but we will get there. I feel our grandchildren will look back and shake their heads in disbelief.

Q: I’ve read you’ve said that you write 500 words per two hours? Are you typically in solitude?

A: It’s 500 words or two hours, whichever comes first. I’m not always alone. I love to write next to my husband where I can touch him or pat his shoulder or something. I like that contact.

Q: It has been reported that you are working on a screenplay for It Could Happen To You. Who would you cast as Greta?

A: Sarah Polley. I love her. She’s the type of actress that I imagine for Greta. I’ve written her as a blonde and petite and Greta doesn’t really talk a lot so it would have to be somebody like Sarah who has her intelligence on her face. I also like Maggie Gyllenhaal and Claire Danes—anyone unconventional.

Q: Would you direct or star in the film?

A: I would really like to be the person to direct it as well. If I did play a part in it I would want to play Marina, the mother of Oliver. And she’s the only woman I’ve written as a redhead.

Q: When you hear Don’t You Forget About Me by the Simple Minds, what’s your first reaction?

A: Really powerful memories. The second I hear the chorus I associate it to what I was going through at the time. I think of [director] John [Hughes] and his generosity.

Q: So much has been made about your involvement in the TV show, The Secret Life of Teenager. The scripts tackle so many political issues, such as abortion. Were you hesitant to sign on?

A: Not at all. [The show’s creator], Brenda Hampton, is not writing a political show. She’s writing drama so the more she creates, the more you get people to talk about it. So I think she brings in all these different points of view—from the right wing and the left it’s pretty smart of her.

Q: What are you reading anything now?

A: I read a lot of Jami Attenberg. She’s come out with a book called The Middlesteins, which is really good. I started Canada by Richard Ford. It is going to take a while, it’s big and it’s got some pace but I’ll stick with it.