In defence of a reviled rock'n'roll starmaker

Book review: Allen Klein: The Man Who Bailed Out The Beatles, Made The Stones and Transformed Rock and Roll 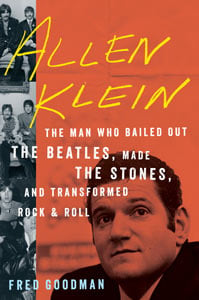 ALLEN KLEIN: THE MAN WHO BAILED OUT THE BEATLES, MADE THE STONES AND TRANSFORMED ROCK & ROLL

Allen Klein was a complex cat. As his biography’s title suggests, he saved the Beatles from financial ruin and found the Stones fame and fortune—before having spectacular fallouts with both bands. Goodman, a music journalist, has scaled “mountains of records” and interviews left behind when Klein died in 2009, a largely reviled figure. Klein has been called a “monster of rock,” but he’s humanized here: Having grown up poor in the 1930s and ’40s, in part in a New Jersey orphanage, he became a hustler who was self-assured but needy, too.

By the late ’50s, he was a trained accountant, doggedly pursuing music publishers in the nascent rock’n’ roll business, on the usually correct assumption that they had swindled their clients. He broke apart standard label-friendly contracts to earn artists more royalties; so impressed was Sam Cooke that he hired him as his manager. From there, Klein signed up the world’s two biggest bands, charming both Keith Richards and John Lennon. But Messrs. Jagger and McCartney were skeptics, and Klein’s bull-in-a-record-shop practices could create significant rifts. Goodman doesn’t find that Klein broke up the Beatles, as some have alleged, but even as he extracted the rotten parts of the band’s Apple Corps in the late ’60s, he took big bites from their profits. Artists whom he’d made rich discovered he’d made himself even richer.

Goodman occasionally gets bogged down with contractual details. But characters such as over-the-top Stones manager Andrew Loog Oldman and the stubborn Yoko Ono—both loved and hated Klein—liven up the book. So too do a raft of anecdotes and Klein’s bouts of artistic idealism: he financed Alejandro Jodorowsky’s cult surrealist film The Holy Mountain, before pulling it from circulation over a financial dispute.

Klein’s story is one of art first nourished and then blighted by commerce; it’s edifying, although it may leave you feeling soiled. One wonders what more might have been accomplished during this supposedly idealistic era if everyone had stopped squabbling over money. Klein would never leave an artist’s career quietly—instead of therapy, writes Goodman, “his balm would be a few decades of litigation.” Why let it bleed when you can let it be?