Inside the fight between Stephen Harper and Canada's wireless companies

In an excerpt from his new memoir, Phil Lind recalls one of the biggest fights of his career 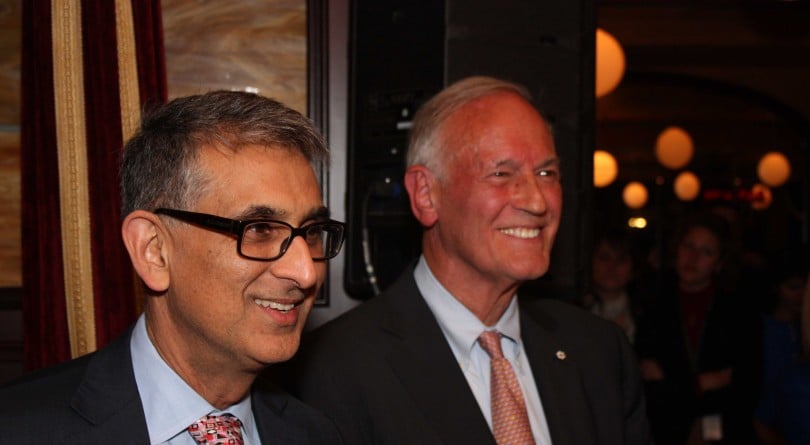 For 40 years, Phil Lind served as the right-hand man to Ted Rogers, the founder and CEO of Rogers Communications. He provided strategic guidance to the entrepreneur as they build an organization that included wireless, cable, telephone, Internet and media assets. In his new memoir, Right Hand Man, Lind tells his own story of some of Canada’s biggest business deals. In this excerpt, he discusses the high-profile fight between Canada’s wireless industry (including Rogers, which owns Maclean’s) and Stephen Harper’s Conservative government.

In 2013, halfway through its mandate, Stephen Harper’s government was looking tired and bereft of captivating political ideas for the next election. It was then that the Conservative PM wrapped himself in his “Captain Consumer” cape and launched an assault upon Canada’s big three wireless phone companies: Rogers, Bell, and Telus. He and his government were going to lower monthly wireless bills for consumers by cracking the cartel. Harper painted us as Russian-style oligopolists who feared increased competition, which was unfair and untrue: genuine and vigorous competition exists between the three.

Nonetheless, in May 2013, Industry Canada officials were dispatched to New York to hold talks with U.S. giant Verizon Wireless, offering enticements like discounted spectrum to help persuade the Americans to set up shop in Canada as the fourth wireless carrier.

We never feared competition. Verizon—or any other huge multinational—could come to Canada. But the rules had to be fair. And Harper was inviting Goliath in and taking the slingshot away from David.

When word of this leaked to Nadir Mohamed, it put Rogers on an immediate war footing. (I’m sure Bell and Telus were, too.) Our own government was helping a foreign company, and one with annual revenues of $75 billion—more than the market capitalization of Rogers, Bell, and Telus put together.

Think about that: Verizon was pulling in more dollars each year than our combined worth on the public stock market. And our federal government was courting them in the misguided view that it would benefit Canadians. At what cost? How many Canadian jobs would be lost and moved to Verizon’s U.S. offices? (Not to mention that if Verizon entered Canada they’d cherry-pick the densely populated urban markets and invest nothing in rural areas, instead riding on the infrastructures Canadians had built.) Just the talk of it clipped $5 billion off our market caps in one day.

MORE: Ted Rogers – In his own words

This was not going to happen without a fight, especially given our history at Rogers. “As campaigns go,” says Ken Engelhart, “on a scale of 1 to 10, this was an 11. Verizon and its sheer enormity made it a gut-churning file.”

It’s important to step back for a moment. In 1983, Ted Rogers asked his board of directors for $500,000 to invest in a new technology called wireless telephony. Every board member, me included, voted against the idea as too risky. Even his wife, Loretta, voted against Ted’s idea. Although he controlled the company, Ted accepted the board’s decision; as I mentioned earlier, he instead put his own money into the first wireless competitor in Canada, then known as Cantel. Then, some years later when his vision was borne out, Ted sold his Cantel shares to Rogers Communications Inc. Today, thanks to Ted’s initial risk, Rogers’s shareholders, employees, and Canadian customers from coast to coast all enjoy the benefits of wireless.

By the time of Harper’s attack, Rogers had invested $30 billion in wireless infrastructure on top of the $500,000 Ted had plunked down; Bell and Telus had invested similar billions. We receive tax credits for this, but our companies are still writing the cheques and providing more than 100,000 jobs for Canadians.

But Harper and his government decided to put it all in jeopardy, from Canadian jobs to investment and retirement income, by offering Verizon Wireless spectrum—for which Rogers, Bell, and Telus weren’t even allowed to bid—and by allowing Verizon to buy smaller Canadian wireless operators we were prohibited from buying. He was changing the rules, and badly.

We moved to DEFCON 3, not quite all-out war but ready for immediate action. Heidi Bonnell, our fabulously connected government-relations operative in Ottawa, led the charge as we met with Conservative MPs to tell them why this policy was dangerous. And Heidi had a strong relationship with Industry Minister James Moore; she talked to him often, and would fill us in on his thinking. But we found out firsthand that he was as zealous as his boss.

It was quite bizarre. When discussing broadcasting and other matters, Moore went off on a libertarian tangent. But when talk turned to wireless he was the complete opposite, a “central planner,” saying that it was incumbent on his government to create a fourth national carrier, by hook or by crook. He simply wouldn’t listen to us. And it was clear that you had to buy into every last thing Harper believed in or you’d be out of cabinet. It quickly became apparent that no one in his government was going to stand up to the prime minister on the Verizon file.

Then the PMO got really nasty when it ran advertisements attacking us (ads that, of course, taxpayers paid for). It was ridiculous. We let the government punch us again and again, until finally we said “That’s enough. No more.”

We moved to DEFCON 2. In the summer of 2013, the CEOs at Rogers, Bell, and Telus appointed internal teams to coordinate a publicity campaign, called Fair for Canada, through which we’d inform as many Canadians as possible about the dangers of Harper’s policy. I was head of the Rogers team; Joe Natale (Rogers’s current CEO) led the Telus team; and Wade Oosterman led Bell’s. Jan Innes, as the fourth member of this tri-party team, coordinated media relations and advertising. Each of the three companies had people reporting to us, and we’d meet weekly, either in person or via conference call, to discuss tactics and overall strategy. We worked very well as a team.

The media was the lowest-hanging fruit. Executives and high-profile experts like former communications minister Francis Fox penned opinion pieces supporting us and calling on the government to make the rules fair. We also held news conferences in cities and towns across Canada. Heidi had us out meeting MPs on their own turf in ridings all over the country. Our unions explained the risk to jobs. Investor-relations people talked to telecom analysts about the potential impact. We lobbied the CRTC asking for their support. And we hired an advertising and marketing firm to blast out our messages.

We visited every and any newspaper editorial board who would have us. Our old foes at the Toronto Star staunchly supported us when publisher John Cruickshank put his name to an August 21, 2013, editorial entitled “Stephen Harper betrays Canada’s interests in telecom fight.” Cruickshank went for Harper’s jugular: “What do you call a man who betrays the interests of his country for a foreign power? The Americans call him a Benedict Arnold. In Canada, we call him Prime Minister,” he began. And it got even more hard-hitting as it went along. We just couldn’t believe it. It was wonderful.

Our sights were firmly set upon Ottawa, but we knew that our Fair for Canada campaign would also be heard loud and clear at Verizon headquarters in New York.

Verizon CEO Lowell McAdam must have sensed that an entry into Canada would be no cakewalk. About a week after the Star editorial appeared, he told Bloomberg News that his company would not be expanding into Canada to buy one or both of Wind Mobile and Mobilicity, two smaller carriers we’d been forbidden from purchasing. McAdam added that public discussion of Verizon’s interest in Canada was “way overblown.”

In the end, Shaw Communications Inc. bought struggling startup carrier Wind Mobile Corp. in 2015. And in that year’s federal election, for the first time in my life, I did not vote Tory. 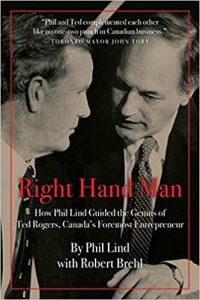 Right Hand Man: How Phil Lind Guided the Genius of Ted Rogers, Canada’s Foremost Entrepreneur will be released on November 3.