REVIEW: It's Even Worse Than it Looks 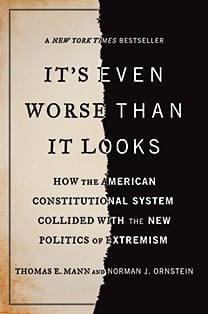 An analysis of the problems of the U.S. political system, this book is also something of a conversion narrative: the story of two centrist pundits who have decided that the centre no longer holds. Mann and Ornstein’s previous book, The Broken Branch, blamed Congressional dysfunction on the failure of both parties to work together.

In It’s Even Worse Than You Think, they come to a different conclusion: Congress can’t get anything done because the Republicans have shifted so far to the right as to become “the insurgent outlier in American politics.” These two centrist pundits now attack the media and political scholars for implying “that the two sides are equally implicated”; to be fair and balanced, they argue, commentators should admit that one side is worse than the other. The problem Mann and Ornstein identify is that the U.S. Congressional system isn’t set up to deal with two parties that are in complete ideological opposition: unlike the Parliamentary system, it requires compromise and cross-party co-operation to pass legislation. If a party doesn’t want to compromise, they have plenty of tools at their disposal to block any government action.

The authors detail many of the once-obscure tactics that Republicans have made common, including the increased use of filibusters and holds to block legislation or appointees that have majority support. They point to the 2011 crisis over the debt limit as an example of the trouble that can be caused by “restive House Republicans eager for a revolution.” Some might question the authors’ assumption that the Republicans are being purely cynical, “allowing electoral goals to dominate policy ones.” They don’t spend a lot of time considering the possibility that representatives may simply be doing what their constituents want. But the book remains a clear-eyed guide to the idea that “a Westminster-style parliamentary system provides a much cleaner form of democratic accountability than the American system.” So take heart, Canadians: no matter how bad we think our system is, it could be worse.