J.K. Rowling reinforces herself as a mystery writer

Book review of The Silkworm, J.K. Rowling’s latest under her Robert Galbraith pseudonym 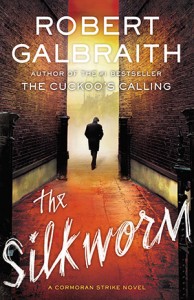 When news of J.K. Rowling’s pseudonym leaked in July last year, sales for her detective fiction debut shot straight to the top of bestseller lists. Rowling says she hid behind the pen name to avoid judgment and disappointment after her Harry Potter phenomenon. But in the second book in her crime fiction series, again featuring private eye Cormoran Strike, Rowling (or rather, Galbraith) reinforces herself as a mystery writer, crafting a mature, gripping thriller that also entertains.

Since their success in cracking the case of a high-profile supermodel’s suicide in The Cuckoo’s Calling, Strike, a lumbering ex-military detective who lost a leg in Afghanistan, and his determined assistant, Robin Ellacott, have seen a boom in business. They have no shortage of clients willing to pay top dollar to dig up dirt, from exposing insurance fraud to suspicious spouses and unfaithful lovers. So when an impoverished-looking mother appears in Strike’s office with a simple request—to find her missing husband, Owen Quine, because she and her disabled daughter need him home—Strike finds it a refreshing change: solving a case driven by love and reunion for once, instead of treachery and divorce. But it turns out the case is far from simple. Quine, a novelist, is found slaughtered in a brutal fashion mirroring events in his most recent, unpublished novel, which seems to metaphorically defame all of literary London.

While The Cuckoo’s Calling was inspired by the glamorous life of rock stars, high fashion and celebrity culture, The Silkworm delves into the competitive literary world Rowling has known for decades. In Quine’s immediate circle—filled with drunken editors, greedy publishers, competitive writers, bullying agents, obsessive fans and students—everyone is a suspect. Rowling nails character dialogue and details: Strike and Robin swap smart deductions, even as they deal with their own struggles. Strike, with his handicapped leg, is too proud to rely on Robin for on-the-ground gumshoeing, while she craves surveillance training and aspires to be more than his secretary. They are Nick and Nora Charles, Lisbeth Salander and Mikael Blomkvist, on a (nearly) purely platonic level. Amidst a mystery swirling in backstabbing, jealousy, and adultery, it’s these two investigators who take centre stage with their adventures through contemporary literary London as they mature to become a team.