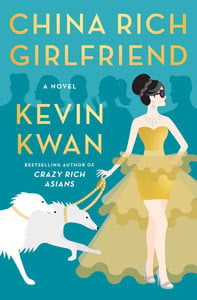 In Crazy Rich Asians, Kevin Kwan’s bestselling first novel published in 2013, readers were introduced to the fictionally uncharted realm of the super-rich in Singapore and Hong Kong—a rising tide of newly minted billionaires living in an excessive alternative universe beyond the wildest imagining of most Westerners. (“This crowd made Upper East Side girls look like Mennonites,” one American-raised character observes in awe.) Kwan, himself raised in a wealthy Singapore family, created a frothy ﬁction focused on a multigenerational, intermarried, mega-rich clan coming together for the “wedding of the year,” an over-the-top spectacle featuring the Vienna Boys Choir and Cirque du Soleil. Kwan created a new hybrid universe—one where there’s a preoccupation with lineage and marrying off daughters into rich families—that is the realm of Jane Austen, combined with an obsession with social hierarchy and status signifiers straight out of Tom Wolfe.

Crazy Rich Asians is a must-read before you tuck into its delicious sequel, China Rich Girlfriend, which manages to be more nuanced (and savage) in its social deconstruction—and even more fun. Kwan picks up the story two years later, adding some new characters, among them Collette Bing, the fashion-blogging daughter of a billionaire whose life of conspicuous consumption makes Gossip Girl look like The Waltons. Again at the book’s centre are Nick Young—heir to an old-money Singapore fortune turned NYU history professor—and his American fiancée, Rachel Chu, whose humble roots met with his family’s displeasure. Now Rachel finds herself in a miraculous, if bumpy, reunion with her long-lost father, a rich Chinese politician, and her Ferrari-crashing wild-child brother. Back, too, is Kitty Pong, the former soap opera star who nabbed a billionaire and is now being tutored in how to rejig her appearance and image to ascend into high society.

Again Kwan punctuates his dialogue with Asian phases (all footnoted) and descriptions of cuisine that demand the book not be read on an empty stomach. Not all is venal social climbing and Hermès shopping sprees, however; moments of human generosity and decency are peppered throughout. But that’s not the pleasure: This stems from tut-tutting the flagrant display of wealth while picking up insider tips and luxuriating in a voyeuristic glimpse into the original Dynasty.

Anne Kingston in conversation with Kevin Kwan on our books podcast, The Bibliopod: