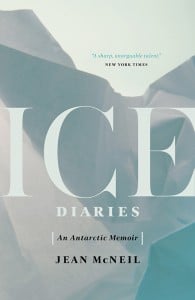 Jean McNeil’s latest book, a memoir, recounts her months in Antarctica as a writer-in-residence with the British Antarctic Survey, charged with translating complex data on climate change into the compelling stuff of ﬁction. This stunning and austere icescape exerts a magnetic pull on the author’s imagination, magnifying her lifelong sense of homelessness and desolation. A discrete, occasional storyline follows McNeil’s painful personal history; she is abandoned by her mother to her grandparents’ violent backwoods home in Cape Breton, N.S., and at age 10 returned to her neglectful mother, who is married and living in an unnamed city reminiscent of Miramichi, N.B. Not even the danger of a murderer on the loose can make her mother offer care and protection. In her teens, she meets her elusive father.

McNeil, the respected author of 10 books, including four works of ﬁction, lives in London, England. In Antarctica, she is the lone writer among a group of scientists—climatologists, glaciologists, oceanographers. Their skepticism of her purpose on the mission matches only her own. But their answers to her unscientiﬁc inquiries—rolled smoothly into the narrative of Ice Diaries—facilitate our understanding of this mysterious zone.

The most spectacular part of the book describes the journey by ship south from Ascension Island. Ship duties ﬁll much of McNeil’s days, but in the evening she dresses for the dining room, where, beyond, ﬂoating icebergs create the ambience of the Titanic. Outside her cabin window, an albatross keeps her company. The book alludes to the expedition literature of Amundsen, Shackleton and Scott, but it’s the air of romanticism that gives the work its haunting power, and it evokes, especially, Coleridge’s Rime of the Ancient Mariner, in which the albatross serves as a symbol of creativity and of the solitude required to sustain it.

McNeil’s ﬁrst-person narrative of her experience wholly absorbs. Aboard the ship she develops a strange intimacy with a young meteorologist named Max. Later she shares a powerful sexual attraction with Tom, a pilot. He teaches her to ﬂy and they become close friends. However, she deliberately avoids the cliché of romance. This is a female adventure story in which, beyond interviewing the scientists and making notes, she is expected to pull her weight in physically demanding, unpredictable and often deadly circumstances. At the same time, distancing herself from love reinforces the sense of loneliness she uses to punish herself.

Each chapter begins with a deﬁnition of a different kind of ice; there seems to be no limit to the varieties. And likewise her own vocabulary is vast. There is no limit to the words she ﬁnds to describe this stunning world of whiteness: “A thin gold coats the pancake ice that has formed in the bay. The sky is olive; around the sun, a mango gleam, ﬂuted by ﬂares of an intense, ﬂuorescent white. This is what it might be like to stand on another planet: to see the sun from the light face of a nightless star, somewhere on the other side of the moon.”

In the brief ﬁnal section, McNeil returns to London, travels some more and considers the facts of climate change. She attributes the world’s lackadaisical response to the human inability to imagine the future. Most of Ice Diaries, however, reads like a novel. It’s a paradox: the best novels emulate real life and the best true stories emulate ﬁction.