The overgrown child behind Kermit the frog

Jaime Weinman reviews the first full-length biography of the Muppeteer 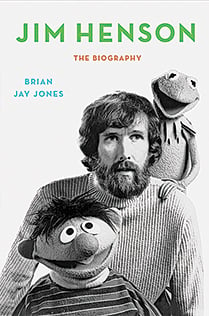 Muppets creator Jim Henson is one of the most universally beloved figures in the history of pop culture, and this book doesn’t try to change that. In the first full-length biography of the puppeteer, Jones treats the man behind Kermit the Frog with near-reverence, and so do most of the people who worked with him on The Muppet Show and Sesame Street. About the worst we learn is that it was “never an easy task” trying to say no to one of his ideas—but then again, most of his ideas turned out to work.

The overgrown child who described himself as a “Mississippi Tom Sawyer” had a mostly charmed life. Using extensive research and interviews, Jones, a former U.S. Senate adviser, manages to give us a sense of how Henson built his puppet empire, as well as clearing up some of the myths and legends about him. It’s often been thought that his Christian Science background contributed to his early death at age 53, but Jones demonstrates that this wasn’t the case; Henson was just too busy to deal with the pneumonia that killed him. Jones also makes it clear that Henson’s career wasn’t a string of uninterrupted successes, going in-depth into the collapse of Henson’s dream of a Broadway show (an idea Henson “would never entirely let go of,” despite his triumphs elsewhere) and his struggles in getting The Muppet Show on the air.

Sometimes, despite the comprehensiveness of the book, it’s hard to tell exactly what kind of person Henson really was. But in his workaholism and his ability to break down the barriers between adult and children’s entertainment, Jones makes the case for Henson as his generation’s equivalent of Walt Disney. Which may explain why, when Henson died, he was in the process of selling out to Disney, and refused any offer from other companies because “he wanted Disney or no one.” Today, it may be Kermit, not Mickey, who provides inspiration to a new generation of creators.