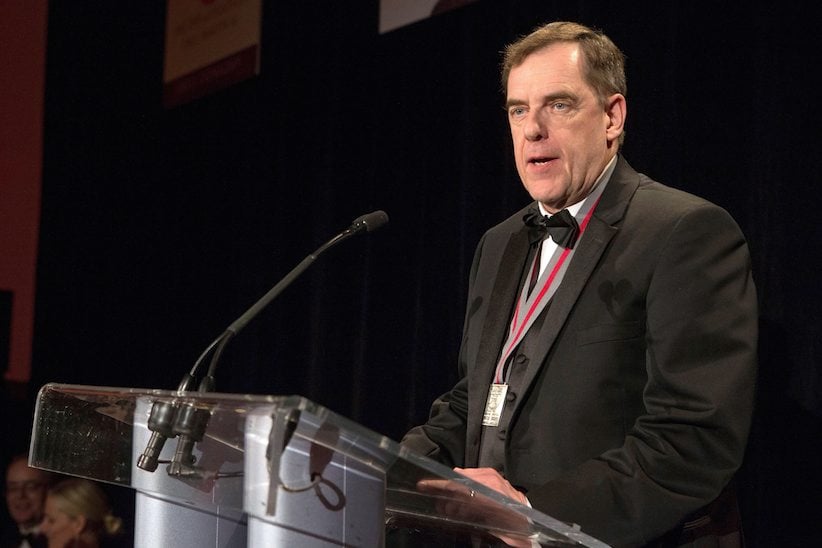 John Ibbitson picks up the 2016 Shaughnessy Cohen Prize for Political Writing in Ottawa on Wednesday April 20, 2016. (Writers’ Trust of Canada)

OTTAWA — John Ibbitson has been awarded the 2016 Shaughnessy Cohen Prize for Political Writing.

The Ottawa-based journalist won the $25,000 prize for “Stephen Harper” (Signal/McClelland & Stewart) a biography on the former Conservative prime minister.

The award was handed out at the annual Politics and the Pen Gala held at the Fairmont Chateau Laurier in Ottawa on Wednesday night.

The other finalists for this year’s prize were each awarded $2,500.

— Sheila Watt-Cloutier for “The Right to Be Cold: One Woman’s Story of Protecting Her Culture, the Arctic, and the Whole Planet” (Allen Lane)

— Andrew Nikiforuk for “Slick Water: Fracking and One Insider’s Stand Against the World’s Most Powerful Industry” (Greystone Books)

The prize was established in honour of the late Windsor, Ont., MP Shaughnessy Cohen.

The Writers’ Trust of Canada established the award in her name to recognize authors of non-fiction works that capture a subject of Canadian political interest.

Now into its 16th year, the prize is sponsored by Aimia and supported by the Politics and the Pen Gala.

FILED UNDER: John Ibbitson Politics and the Pen