A review of 'John Wayne: The Life and Legend' by By Scott Eyman 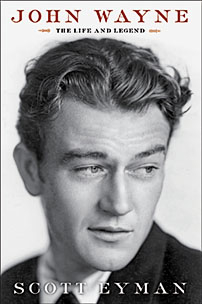 JOHN WAYNE: THE LIFE AND LEGEND

As Eyman notes in his introduction, John Wayne is one of the few classic Hollywood stars to still loom large in popular culture. While Clark Gable and Gary Cooper are meaningful only to movie buffs, the man who was originally named Marion Morrison is one of the world’s leading symbols of masculinity and American values: To many people around the world, John Wayne is America, for better or for worse.

This long biography covers Wayne’s entire career, from his work as a B-western actor to his nearly 40-year reign as one of the world’s top box-office attractions. Eyman uses Wayne’s interviews and letters, as well as interviews with people who knew him, to show his legendary professionalism, his likeability (even for those who disdained his right-wing politics), as well as his temper and his capacity for grudges (he had a lifelong one against Columbia Pictures president Harry Cohn for badmouthing him).

Though Eyman has written many other show-business biographies, including a book about Wayne’s mentor, John Ford, his prose sometimes sounds like the work of a less experienced writer, and he has a too-frequent tendency to insert his opinions or add qualifying statements, particularly on political matters. A line such as, “It was a time when conservatives were angry (conservatives are always angry) and liberals were nervous (liberals are always nervous)” doesn’t offer much enlightenment. And, in part because Eyman covered a lot of Wayne’s films in his Ford biography, his analysis of them here can be superficial.

But if Wayne’s artistry doesn’t always come through in the book, his professional relationships do, including his famous loyalty to friends and co-workers. Eyman is particularly good on the history of Wayne’s two big directorial projects of the 1960s, The Alamo and the pro-Vietnam war melodrama The Green Berets. Drawing on reports from cast and crew, he looks at Wayne’s thwarted ambitions to make big cinematic statements about what America meant to him, and why, despite his thorough knowledge of film, he didn’t have it in him to be a good director. Intelligent as he was, his ability to move and delight audiences was largely instinctive: In a telling moment, Kirk Douglas told the Duke, “You’re not really John Wayne, you know,” only to realize that “he really thought he was John Wayne.”