Johnny Cash: 'A pill-popping, alcoholic womanizer on the edge of self-inflicted oblivion' 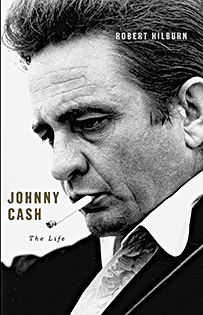 Like many of his Johnny-come-lately fans, I discovered the Man in Black when he was close to death. In 1994, he recorded the first of seven albums alongside producer and rap-rock shapeshifter Rick Rubin, with the fourth released just before Cash died in 2003. With his plaintive delivery Cash brought new yearning to songs like Nick Cave’s The Mercy Seat, Soundgarden’s Rusty Cage and, especially, Nine Inch Nails’ Hurt. Cash could make any song sound like it was pouring from his own guts, even if he hadn’t written it.

We find out why in a pitch-perfect nugget typical of Hilburn’s brilliant Cash biography. Sincerity is country music’s greatest compliment, something Cash learned from his idol, country singer Jimmy Rodgers. “As Cash listened to Rodgers’s records, he identified with the man who had grown up in hard times and found in music both a comfort and a personal salvation,” Hilburn writes.

The Johnny Cash that Hilburn meticulously sketches is exactly this type of man—with an added caveat. Music was Cash’s comfort and salvation, but it also turned the shy, God-fearing boy from Kingsland, Ark., into an explosive, pill-popping, alcoholic womanizer who teetered on the edge of self-inflicted oblivion for much of his life.

There are already over 50 titles written about or by Cash, yet Hilburn’s work is a standout if only because of his access to the man. As a music critic, Hilburn followed Cash’s career from the late ’60s onward; as a friend, he was close to Cash in his dying days. He writes about the relationship between Cash and the latter’s second wife, June Carter, formed as it was in adultery, fuelled by music, misery and at times drugs, and punctuated by separation and longing. And yet this tornado-like union is brought to a scene of peaceful heartbreak by Hilburn, who documents the last moments of Carter’s life in a hospital, with Cash by her side. You might have to put the book down for a moment.

Cash’s salvation, as it were, was in those Rubin records. The ’80s weren’t kind to Cash, when he drifted into a maudlin caricature of himself. Rubin bought out Cash’s remaining contract for a song, and brought new sincerity to the Man in Black. “I’d love to hear some of your favourite songs,” Rubin said to Cash the first time they met. The rest is history—and a hell of an epitaph.