REVIEW: Jury Decision Making: The State of the Science 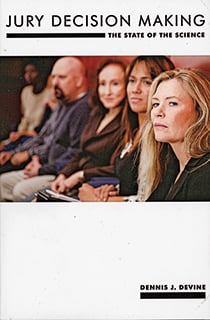 It doesn’t bear a title to thrill the heart of anyone not a social scientist, but Devine’s survey of what scholars have learned in 40 years of research deals with arguably the most important interaction between ordinary citizens and their governing institutions. So what has been discovered? Much of it is unsurprising. Twelve-person juries are more likely to end up hung (unable to reach a consensus) and more likely to include minorities—both simple functions of the numbers involved—and thereby more likely (in experts’ opinions) to come to “just” verdicts. Juries hate the zero-sum logic of guilty/not guilty, especially in serious cases, where they navigate between the risks of letting a potential murderer go free or sending an innocent man to life in prison (or, in the U.S., to death row). In mock trials they embrace options from “guilty but mentally ill” to the famous Scottish “not proven.”

Similarly, as prosecutors are very aware, the more charges thrown at a defendant, the more likely a conviction, and not just because jurors tend to think a multiple-charged person must be guilty of something. Studies have shown that in concurrent mock trials with the same charge and the same evidence presented, but where one defendant has additional counts, the odds of conviction on the primary charge go up in his case. Piling on charges is an inherently unfair, pro-prosecutorial tactic, as Conrad Black could testify.

And for fans of courtroom drama, fictional or real, who wonder how jurors manage to put out of mind the inadmissible evidence that angry judges tell them to disregard, the answer is: they don’t. That’s a core fact of human psychology that fits smoothly within the newest, and most convincing, theory of how juries come to their decisions. We are a story species: we don’t so much sift evidence as fit it into a factually—and morally—coherent narrative. When we hear something that clicks into the chain as a piece of the puzzle, we don’t discard it.