The duchess, her mother and Prince William 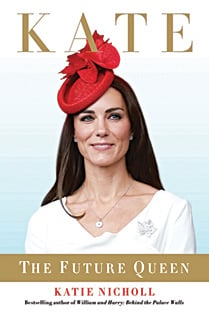 The fascination with Kate, duchess of Cambridge, shows no sign of dimming. If anything, the spotlight has intensified, now that she’s given birth to George. When she appeared at a charity gala last week with William, it was front-page news. And now royal journalist Katie Nicholl is out with a chatty, gossipy biography of the 31-year-old duchess that reveals how she caught the eye of the future king and kept his interest.

The author provides a surprisingly comprehensive account of Kate’s early years. Nicholls interviewed seemingly everyone willing to talk, either on or off the record. Kate’s parents, Carole and Michael Middleton, both had the drive to lift the family into multi-millionaire status by starting a party-planning mail-order firm. Yet financial success is secondary to the achievement of creating a strong, close family, whose members are unafraid of hard work and taking risks. One of those chances, Nicholls reveals, was when Kate abruptly turned down an approved spot at the University of Edinburgh to apply to the University of St. Andrews, just after it was announced William was going to attend. She got in.

While the story of how William and Kate fell in love during their university years is relatively well known, the path to the altar was rough. In 2007, when William was beginning his military duties, he spent so much time drinking in clubs and ignoring Kate that she broke up with him. It was her mother who told Kate to get on with her life. Soon the prince realized what he’d lost and was patching up the relationship. Two years later, as the paparazzi onslaught grew, Carole boldly confronted William about his intentions; he promised to marry her daughter. Now, William is so close to his in-laws that they regularly holiday together. And after their son was born, the duke and duchess of Cambridge spent the first weeks as new parents not at a royal retreat, but at the Middleton home in Berkshire.