'A stunning indictment of the current health care system in the U.S.' 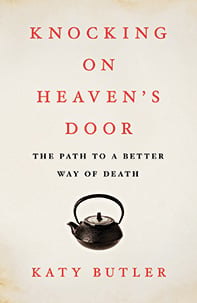 In 2010, Butler wrote a much-discussed magazine article that compared and contrasted the deaths of her parents. Her father, a retired professor, suffered from dementia, a condition that was prolonged for years after the instalment of a pacemaker. Butler’s mother, faced with the option of open-heart surgery at the age of 84, refused, suffering two heart attacks before she died. Both deaths shattered Butler’s belief that we can maintain control of the end of our lives.

In this expansion of her original article, Butler gives us a heartfelt, honest portrayal of her parents’ dying days, the ways in which their doctors and hospitals failed them, and a stunning indictment of the current health care system in the U.S., rife with needless expenses, waste, doctors getting kickbacks and a dogged belief that all life should be prolonged—even if the life in question bears little resemblance to actual living.

Knocking on Heaven’s Door should rile up readers and serve as a conversation starter for policymakers and laypeople on both sides of the border. We all need to have greater awareness of the human-dignity costs to prolonging life using any means necessary.