Hope Jahren pens a riveting memoir and an ode to plants 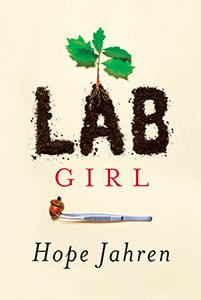 Botany, like cybersecurity, ocean acidification or stamp collecting, can elicit genuine interest from maybe six per cent of the reading public. In this memoir, distinguished paleobotanist Hope Jahren takes a valiant stab at punching up that percentage, misses, and lands on something far better.

Her short, standalone chapters on the inner lives of plants are fascinating, even intoxicating. But the story of her life, spanning her childhood in an emotionally chilly Scandinavian-American family, her science education, her struggles with bipolar disorder, and eventual life as a “mangy stray” (woman) in academia, succeeds as a non-fiction novel.

Lab Girl has madcap adventures (research trips wherein Jahren tries to instill petulant undergrads with a sense of awe at the complexity of soils), vivid scenes (the best first-hand account of childbirth this reviewer has ever read), and a profound, bittersweet love story at its core. The result is a hybrid weirder and more beautiful than the prehistoric plants she studies—part road movie, part academic paper, part polemic extolling public funding for science.

On that last point she’s most convincing. Many American scientists whose work doesn’t involve either the space program or some kind of weaponry subsist on a pittance and lead precarious financial lives. “It would be nice to promise an employee who has sacrificed everything for science and works 80 hours a week more than about six months of job security,” Jahren writes. “If you’re reading this, and you wish to support us, please give me a call. It would be insane of me not to include that sentence.” She’s right; the less flashy scientific disciplines rarely get their due. Plant biology is the ultimate example: The earth’s plants are in crisis because of habitat destruction and climate change, and we can’t live without them.

Maybe it’s true that practically no one wants to read about plants, not even in such eloquent and urgent terms. Some will probably flip past those parts in a fury of needing to know what happens next. They’ll be missing out on some of the most haunting and moving passages, though the human story is so good, you can’t really blame them.