Book review: Life in a Marital Institution: Twenty Years of Monogamy in One Terrifying Memoir 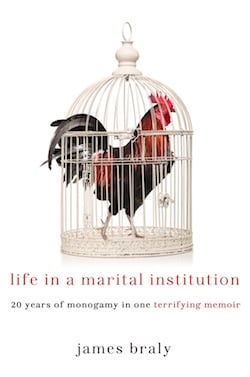 Braly and his wife (he calls her Jane in the book) run through 13 marriage counsellors before deciding to separate. The journey, as told by Braly, is hilarious and raw, full of self-excoriating stories and internal monologue. Readers who miss the late Spalding Gray will cheer on Braly, wondering if his relationship with Jane is anything like Gray’s complex entanglement with Renée Shafransky and his last wife, Katie Russo. Not so much. Braly’s marriage is a unique mess, and the description of its undoing has much to say about monogamy, celibacy and parenting.

When Braly first met Jane in a university café, she took it upon herself to edit a poem he was writing and criticize his handwriting. He was hooked. Struggling to impress Jane—an older, worldly masters of divinity student—he had to find his place among her seminary friends. “Salving the hurt feelings of a waiter, or a spurned bisexual predator—that’s my strength,” he deadpans. The next 15 years were a power struggle. In places, the book reads like a rollicking monogamy farce, intercut with fights about breastfeeding, organic food and burying placentas. “Sometimes my facts are no substitute for Jane’s feelings,” he finally realized.

It takes a move to upstate New York to actually trigger the separation. He mocks their new neighbours, Jane’s friends, for being “pussy-whipped beta farmers who’ve been ground into the soil of the organic Luddite psycho-matriarchy.” Even so, Braly never takes any cheap shots directly at Jane. That’s an endearing quality in a marriage memoir. If anything, the book contains one too many loving tributes to her force of personality. This is the book he felt he could write. I’d also like to read the first draft—the book he knew he couldn’t.