The life of a bunga bunga king 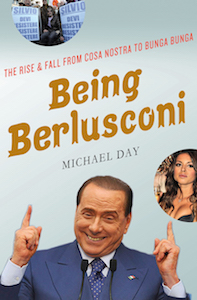 Among the phrases Michael Day uses to describe Silvio Berlusconi are: “Saint Silvio of Arcore,” “Emperor Berlusca,” “a sad caricature of himself,” “a mandarin that had been left in the bowl too long,” and “the shadiest leader in the Western world.” As poisonous as the media-mogul-turned-three-time-prime minister has been to his country, his colourful nature—from over-tanned orange to dyspeptic purple—is a godsend for a biographer.

With smirking aplomb, Day, the Italy correspondent for the Independent, writes about Berlusconi’s machinations during a surprisingly long political career, and explains how someone so obviously corrupt could evade conviction so often, and in so public a role. The answer lies in an unholy mix of charm, smarm, audacity, shamelessness and the cunning to take advantage of a political system that was already hopelessly corrupt. Tellingly, Berlusconi worked as both a cruise-ship entertainer and a vacuum-cleaner salesman before developing property with the help of “opaque investments”—sourced, Day alleges, through the Mafia connections Berlusconi has always denied.

From there, he bought newspapers, television stations and soccer powerhouse AC Milan, and sought political power, attempting, Day argues, to carve out legal immunity for himself and his cronies. He’d either buy out his opponents or wage war through the media he controlled. While in power, he would change the law repeatedly to avoid prosecution—or delay court proceedings until he hit the statute of limitations, which protects him to this day. He became a patron saint of tax-evaders, who voted for him en masse. So rare is it, in this book, to find upstanding morals that, when someone refuses to be corrupted, the reader wonders, “What’s wrong with him?”

Considering the gallery of bumbling rogues that surrounded him, it’s tempting to find in Berlusconi something attractive—except when one considers that his exploitative patronage system for young women helped Italy become what Day calls “the land that feminism forgot.” He also allowed historical monuments to be ruined, cozied up to both Gadhafi and Putin, and steered the country into economic straits so dire, the president had to engineer a coup to evict him from office.

Meanwhile, in the court of public opinion, at least, Berlusconi was finally hoisted by his own phallic petard. Day offers a detailed description of the much-disputed term “bunga bunga”: It has to do with a shabby disco room in a villa, singing, costumes, a statue with an enlarged member—and money. It’s money “Il Cavaliere” retains even now, in his political afterlife, proving that, if you write the laws, you can take it with you.