Linden MacIntyre on writing about the reverberations of war

The former CBC journalist shares the experiences that inspired his new, Lebanese Civil War-centred novel, and explains why his next won't be a thriller 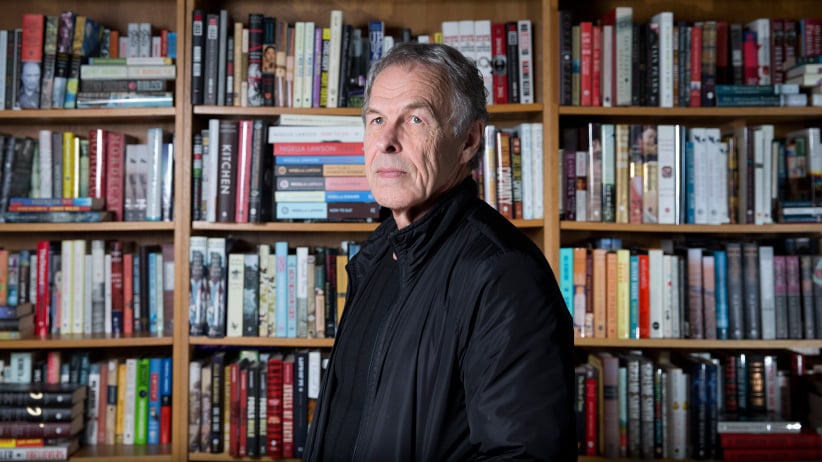 A suspenseful mix of the personal and political, Linden MacIntyre’s fifth novel, The Only Café, revolves around the attempts of Cyril Cormier, a 24-year-old aspiring journalist, to unravel the disappearance and apparent death of his Lebanese-born father, Pierre. A lawyer, Pierre came to Canada as a refugee under obscure circumstances during the Lebanese Civil War in the early ’80s. MacIntyre, 74, who won the 2009 Scotiabank Giller Prize for his second novel, The Bishop’s Man, worked as a foreign correspondent and journalist for the CBC for almost 40 years, until his retirement in 2011. He currently splits his time between homes in Toronto and Cape Breton. This interview has been edited for length.

Q: This is your first novel not exclusively set in Canada. What led you to centre it on the Lebanese Civil War, and specifically the 1982 massacre in the Sabra and Shatila camps?

A: I covered the Lebanese Civil War from time to time during the ’80s and ’90s for the CBC. The experience offered harrowing insights into the nature of armed conflict in which civilians become collateral—and in many cases primary—targets of the violence. One of those visits to Lebanon coincided with the massacre of civilians in the Sabra and Shatila refugee neighbourhoods of Beirut in September 1982. I visited the scene a few days later. There is still no precise number of the dead. Estimates, invariably political, range between 800 and 3,000. The absence of precision is itself revealing of the value attached by combatants to the lives of innocents among them. It was, for me, the first time (but not the last) I felt my inadequacy as a journalist to report “the truth”—about political expedience, human brutality, the permanent disfigurements of cruelty, etc.

Q: Does that elusiveness make it, in some ways, a better subject for the “truth” of fiction? Did writing a novel about your experiences occur to you at the time?

A: It never crossed my mind to write a novel about the specific experience, but I spent the next six years reflecting on the idea it inspired in me—that violence causes a kind of infection that leads to disfigurement of character, even in people who are unaware of the initial cause. Damaged people damage other people. The consequences of violence migrate through space and time. What happened in Beirut in September 1982 happened countless times in the 20th century, killed more than 200 million people—deaths caused “by human design.” For every victim, there were perpetrators, witnesses and survivors—every one of whom was somehow damaged by the violent moment. This was a thought behind several novels about the troubled lives of children of damaged veterans of war.

READ: The modern world’s mass violence is almost entirely due to civil wars

Q: Your character Pierre is a good example of this: his experiences in Lebanon have made him a closed book to his family and, arguably, to himself. Fatalism and redemption both pose unique dangers to fiction; did you find yourself toeing a line between them when writing Pierre, or the damaged characters in your past novels?

A: I think fatalism and redemption are themes that help a reader organize and eventually “own” a story or character. Writing them, I just want them to be real, and in reality I don’t think events are thematic until in retrospect, if ever. So I guess I’d have to say no. Maybe it’s a hangover from journalism.

Q: Are any characters based on real people?

A: A couple are and have the real names. All others, including Ari and Pierre, are composites from people I have encountered reporting stories on the military, law enforcement and security. I believe, however, that not far below the particulars of what we do we are all pretty similar. And so a lot of character can be constructed from self-knowledge.

A: Best time for me is early morning when the world feels quiet. But years as a reporter enabled me to write anywhere at any time in any medium—notebook, napkin, boarding pass, laptop. All the same.

Q: How much do you map out a novel before beginning it?

A: I usually have an idea and a rough road map for the story. A few key characters. I like to know where the story will end, but that isn’t always the case. A story will take on a life and grow into what it wants to be. The Only Café was like that.  I think that the “idea” is important. While a good yarn is an experience, it must also leave the reader or listener or viewer things to think about.

Q: What writers do you most admire? Any you’d cite as influences?

A: I think writers we admire influence us in many ways and not just as writers. I’ve admired different writers at different times. The usual suspects. Hemingway, Maugham, Steinbeck, John O’Hara, Mary McCarthy, Edna O’Brien, Brian Moore when I was young. The fiction of Jean-Paul Sartre when I thought I was deep. Loved H.E. Bates as a young parent. Updike. Then everything Irish, until I found the best of them, William Trevor and John McGahern. And they were almost enough. Jonathan Franzen, my currently favourite American. And the Canadians, Margaret Atwood, Joseph Boyden (never mind all that), Lynn Coady, Alistair MacLeod and Alexander MacLeod. And all the Newfoundlanders, Michael Crummey most of all.

Q: I’m assuming you’ve followed the recent debates about cultural appropriation in fiction. André Alexis recently wrote in the Globe that he decided against using the names of Indigenous gods in a novel he’s working on because he ultimately didn’t feel “at ease” doing so. Has anything you’ve written made you ill at ease? Pierre Cormier is Lebanese but has lived in Cape Breton long enough to almost pass for a local—was that to bring him closer to your own experience?

A: No. It works because Cape Breton has a large and vibrant Lebanese community. I know a priest from there who actually went to Lebanon during the civil war and was injured there. I follow the appropriation discussion but avoid it because it seems to be framed by politics rather than morality. Politics is about interests. Morality is about motivation. What compels people to seem to be what they are not? To own that to which they are not entitled? To pose? To steal?

If acts of creative pretence or theft are motivated by respect or admiration or aspiration, I could be sympathetic. If they are for purposes of material acquisition—status, money, celebrity—they are fraudulent.

I’ve written from the point of view of a priest, a woman, a millennial, a Phalangist refugee. I hope I haven’t pretended to be any of them. I stand accountable for the authenticity of the portrayal, but not the motivation. The only motivation was to tell a story that I own.

Q: Your work to date has many of the ingredients—secrets, deception, hungry journalists—of genre writing, without having quite crossed that line. Have you considered writing a straight-up thriller or crime novel?

A: Not really. I think it’s difficult to be original writing genre fiction. I often thought it would be fun to write a skin book. But I’d have to make too much up and it wouldn’t be very credible.

Q: No one accused Fifty Shades of Grey of being credible, and it sold well. Think of the retirement benefits.

A: Yes. But maybe the best retirement benefit is self-respect, [which is] sometimes harder to acquire than wealth.

Q: Has retirement, overall, been good for the writing life? Do you miss journalism?

A: I have a question for you. If I’m writing in a serious, full-time way, am I retired? However, not working in journalism enables full attention to writing projects, which is good. But I miss the benefits of daily contact with people who are younger, energetic, engaged. And the necessary involvement with people and places and situations that enrich the imagination. I miss the enforced encounters with unusual projections of reality. On balance, yes. I miss it.

Q: Was there any sense of living vicariously through the novel’s young, engaged journalists—the fictional network’s tall, balding anchor, “Lloyd Manville,” notwithstanding?

A: There’s no homage intended for anybody. But I wanted the story to reflect the precarious state of the workplace for talented young people trying to get started in journalism. They bring great gifts—languages, tech sophistication, commitment. They need only time and a reasonable opportunity to experience reality from the perspective of the storyteller to fulfill great potential. This is what is so elusive—field experience. It leaves people in an awkward spot, struggling to get experience in the limited circumstances of internship and short-term temporary contracts that leave them vulnerable to exploitation.

Q: I gather that exploitation comes in a variety of forms. Here, the network’s star correspondent, Suzanne, seduces Cyril, an intern half her age.

A: Seduction is complex, isn’t it? The word implies persuasion. And persuasion would, in its traditional usage, exclude coercion. And yet now that we have correctly started to factor “power” into the equation of seduction, it changes the morality of the transaction. And so young Cyril, on the morning after, finds himself in an emotional place that, I imagine, might be familiar to many young women in the media and elsewhere.

Q: The exploitation this novel looks at—in journalism and war—is clearly different in degree from the exploitation of children by Catholic priests in The Bishop’s Man; the people involved are, for one thing, technically adults. But is it so different in kind—i.e., aren’t these all examples of often charismatic individuals taking advantage of opportunities created by hierarchies?

A: Yes. Exploitation is an abuse of power, an act of domination driven by basic insecurity. I think all hierarchies create opportunities for that. Donald Trump is an extreme illustration of an otherwise normal tendency. Institutions are supposed to have safeguards to prevent or mitigate the tendency. Instead they often become vehicles for abuse.

Q: Any other novels in the works? Will you ever write one without a priest in it?

A: Well, now that I’m aware of it, I will retire the priest from future fiction. I’m now working on a non-fiction book, however, and there will be a priest in it. A minor character, but very real.