Living on the coast, waiting for the big one

A review of "The Next Tsunami: Living on a Restless Coast" by Bonnie Henderson 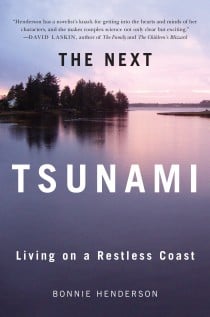 THE NEXT TSUNAMI: LIVING ON A RESTLESS COAST

In many ways, a book like this shouldn’t work as well as it does. For one thing, the topic is about a disaster that hasn’t happened yet—a devastating tsunami that could consume communities all along the Pacific Northwest coast from Vancouver Island down to northern California. A lot of people might think, who cares? Wake me when it happens.

For another thing, the book is heavy on historical science: plate tectonics, paleoseismology, dendrochronology. As Henderson points out, tectonic plates move at about the same rate as your fingernails grow, not exactly the plot material of a page-turner. Yet that’s what this feels like. It’s non-fiction writing of the calibre of authors like Margaret MacMillan, Margaret Visser and Susan Orlean.

The story starts when Henderson meets by accident the garrulous, underemployed geologist Tom Horning in a bakery café in the small coastal town of Seaside, Ore. Horning was 10 when the worst earthquake in the recorded history of North America hit Alaska on March 26, 1964. The quake sent a deep underwater wave barrelling down the coast at a speed faster than a jet airliner can fly. It crested the northern shore of Vancouver Island before tearing up Horning’s neck of the woods. Shaken awake at midnight, he ran from his bunkhouse to find “thick, lustrous yellow foam piled deep against the house and cottage. And fish: flounders and perch and bullheads, lying still and scattered all over the yard.” Further south, the wave engulfed four children camping with their parents, sparing the parents but sweeping all four kids out to sea.

Understanding how and why another tsunami more powerful than this is bound to strike is what makes this book a must-read for anyone living on the West Coast. We know about the quake. “The earthquake now expected off the northwest coast is likely to be bigger than anything the San Andreas Fault can kick up,” says one scientist. But it won’t be the quake we need to worry about, says Horning. The quake will be the warning. It’ll be the wall of water that comes crashing in. Coastal native people remember the destruction of the last truly cataclysmic wave that swept away whole villages. It’s been passed down in the lore since the great quake of Jan. 27, 1700. “We, on the other hand,” says scientist Chris Goldfinger, “can’t remember much that happened before Twitter and Facebook.” Business owners fear that tsunami preparedness will scare away the tourists. Horning says, “Why not do something about it and claim bragging rights? ‘Seaside, The Most Tsunami-Ready City on the Oregon Coast!’ ”