Book review: Pride and Prejudice from the servants' viewpoint 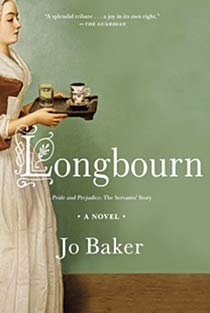 Happy Birthday, Pride and Prejudice! In your 200 years, you’ve begotten more spinoffs than turns in a Regency-era reel around a ballroom. We’ve got frothy (Austenland, which sees modern-day folk play in the period); commercial (P.D. James’s whodunit Death Comes to Pemberley); and weird but trendy (Pride and Prejudice and Zombies). Shame the closest your author, Jane Austen, has ever come to realizing some of that revenue is finally getting her face on Britain’s new 10-pound note. Perhaps it’s only fitting, then, that British writer Jo Baker has taken a look at the similarly financially disenfranchised—the servants in Austen’s world—in her novel, Longbourn.

The plot of Pride and Prejudice—will snobbish Elizabeth Bennet charm snobbish Mr. Darcy into marrying her?—seeps into the cracks of Longbourn, but for the most part the action is downstairs. At the novel’s heart is a love triangle between Sarah, a frustrated maid; James, a mysterious footman only recently employed by the Bennets; and Ptolemy, a dashing and ambitious servant of neighbouring gentleman Mr. Bingley. This is no gossipy romcom, however. The lives of the 99 per cent—particularly those involved in the hard labour of running a household in pre-industrialized Britain—is described in all of its skin-chafing glory. Even more absorbing, Longbourn takes a radical shift about two-thirds in, relating James’s stint in the British army during the Napoleonic wars, where boredom, brutality and near-starvation were more common than combat.

When Baker does use Austen’s original characters, she makes them extreme, emphasizing the discrepancy of power and privilege that class bestows. The Bennet girls’ obliviousness to the lives of the help makes their marriage-obsessed navel-gazing seem callous; their father’s aloofness barely disguises an unfeeling rigidity and a dark past; and Mr. Wickham’s flirtations are creepily predatory. The blatant cruelty of the ruling class is on full display when Sarah asks Colonel Forster for help locating her missing beau; outraged, he reminds her, “You forget yourself.” Indeed, so many of the Austen spinoffs, not to mention readers, forget Sarah and the people like her. Baker gives them their chance to live on the page that should engross both neophyte and veteran Austen readers alike.