Lost And Found: Unexpected Revelations About Food And Money 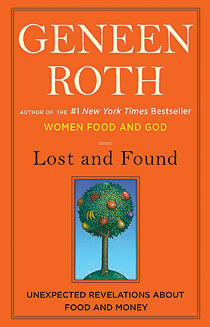 The author and her husband lost $1 million in Bernie Madoff’s infamous Ponzi scheme. It was their life savings. This book is Roth’s attempt to help others cope when blindsided by financial loss. In excoriating detail, she describes her psychological unravelling and eventual recovery during the weeks following Madoff’s arrest. All the while, Roth makes rather obvious, yet entertaining, parallels between overeating and mindless spending. The way you eat is the way you spend.

What qualifies her to write Lost and Found? As well as having been bilked by Madoff, she endured 17 years of eating disorders and came back from the brink of suicide. She has written seven books about compulsive eating, resulting in an appearance on Oprah and weeks on the bestseller list. Roth would be the first to admit she is a shaky role model. When faced with ruin, her reaction was to go shopping. She agonized over a pair of $1,000 glasses and admits she “isn’t as evolved about money as food yet.” No kidding. In confessional tones, she discusses the shame she felt for making money. For years, she’d treated it the same way she did food: “as if it were stolen,” stashing it out of sight and indulging recklessly, living in deprivation mode.

To get out of deprivation mode, she recommends a (mainly) Buddhist approach: live in the moment, appreciate what you have, and buck up. It’s tempting to view this book as a cash grab—the author shaking the money tree to retrieve her fortune. Not so. Soon after Madoff raided her savings, Roth received a windfall from her previous book, Women, Food and God. Her intentions are noble, yet some skinflints (like this reader) may not react well to the closing chapter in which Roth claims “many smart, powerful women become spineless and clueless when faced with making financial decisions.” Try running that by a single mom.