Louise Erdrich's chilling portrayal of America as 'a disintegrating country'

The acclaimed author began her dystopian story 15 years ago, but in the Trump era it seems particularly relevant 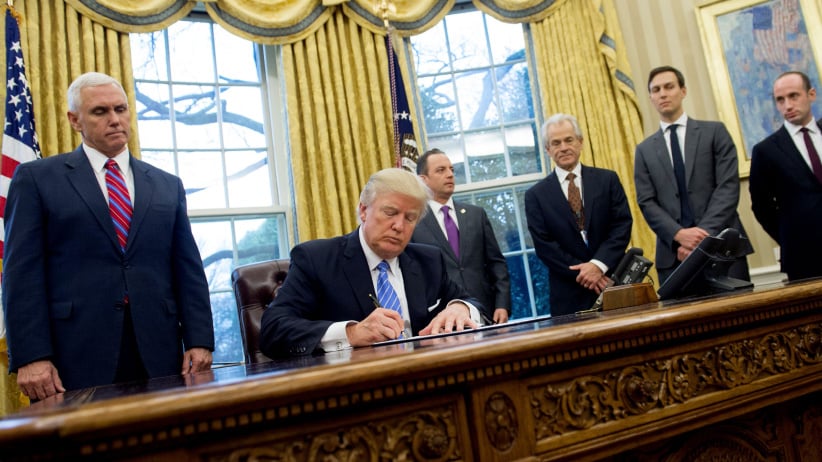 Louise Erdrich’s new novel, Future Home of the Living God, portrays American devolution—not just as a metaphor, but literally, too: there are strange, giant animals lurking in backyards and women giving birth to stillborn, pre-sapiens hominid babies. When a doctor finds out that the protagonist, Cedar Hawk Songmaker, may be carrying a healthy child, he urges her to tie him up and run away from his clinic—and away from the shadowy, Christian fundamentalist forces taking over the country and detaining pregnant women.

Where most dystopias follow a worrying trend or two to their dire logical conclusions, Erdrich, the celebrated Minnesotan Chippewa writer, doesn’t stop there. Cedar has to deal with climate change, rampant inequality, high-tech surveillance, the subjugation of women, an overlap between church and state. The grimness is somewhat balanced by Cedar’s warmth and resilience, and by Erdrich’s sense of irony: Cedar’s name was given to her by her adoptive, white liberal parents, whereas her Ojibwa birth parents had called her Mary Potts. She spends much of her time in hiding, between her South Minneapolis bungalow and a nearby reserve where resistance to the encroaching power structure is building. Erdrich’s books (including 2012’s National Book Award-winning The Round House and 2016’s National Book Critics Circle Award-winning LaRose) tend to be interconnected and set in a version of the present day dusted with magic realism, but here, she proves her genre-fiction mettle with an intelligent, devastating thriller. If the world outside Cedar’s hiding places is somewhat opaque, the book’s cri de coeur certainly resonates.

Perhaps the most surprising thing about Future Home is that Erdrich started writing it 15 years ago and then set it aside in favour of other books, picking it up again only last year. By email—she eschews phone interviews—Erdrich discussed her vision of America as “a disintegrating country,” and where one might find a spark of hope.

Q: How did you go about dreaming up and crafting your dystopian U.S.?

A: One of the characters in Future Home of the Living God says that the first thing that happens when things fall apart is that nobody knows what is happening. In putting together my “world” in this book, I was interested in what happens when there isn’t a reliable source of news. The Internet disappears, just the way it does when you hit a cell dead zone.  Nobody knows who, or what, entity is in charge of a disintegrating country.

Of course, because I started this book in 2002, I didn’t know that this would reflect the current situation in the U.S. Since 1987, when the Federal Communications Commission revoked the Fairness Doctrine, a rule that news be balanced by two sides of a story, we have a situation where everyone chooses the news source that mirrors their own views.  We only hear what we want to hear. This tendency . . . was exploited during the 2016 election by Russian disinformation specialists. So as things are falling apart here, the truth is difficult to tease out from partisan interpretation. This is a dangerous situation.

Q: Barack Obama liked to refer to the “remarkable progress” he said the U.S. had made during his terms, but as you noted in your letter to the novel’s advance readers, there have been times when “things seemed to be moving backward”—such as now! Should we be skeptical of the ideology of progress?

A: Should we be skeptical of the ideology of progress? Completely. We should evaluate “progress” in terms of the degree progress helps people.  That said, many times ideas that seem helpful turn out to be harmful. But I would say that social progress, which includes a general movement toward equality, acceptance of our differences, and the protection of helpless members of our society, is good.

But some forms of technological “progress” are categorically not good. The United States is a country hostage to arms merchants to whom progress means making deadlier weapons. The “American carnage” that Donald Trump spoke of (I don’t know what he really meant) is definitely the rampant gun violence in the U.S. We should not be putting military-grade weapons in the hands of ordinary citizens, sane or insane. Just having to write that sentence seems insane. Canadians must be repelled by the irrationality of American gun love and the nihilism of gun manufacturers. In addition, our police force has been over-militarized. That was obvious in Standing Rock.

Q: I understand that when you revised the book, you cut back its length from the original manuscript. Did you make any conceptual changes based on what’s happened in the world (and the U.S.) since?

A: I started the book in 2002, worked on the book for years, then forgot about it. Actually, I forgot about it when Obama was in office, which seems a decade ago. After the 2016 election, this book seemed the only relevant text. I did cut several hundred pages—I had gone down a rabbit hole chasing theological interpretations of the Immaculate Conception and other strange myths. Anyway, I left the parts of the book that were relevant to the action—a pregnant woman on the run from ideological monsters. I wanted to compress the tension in the book. I wanted to make a pregnant woman the hero of a thriller. I wrote the end of the book in the spring of 2017.

Canadians probably were aware that a sense of panic and disgust overwhelmed the majority of Americans after the election. What we have experienced since then has been a sense of retrograde motion. The chaos at the highest levels of our government is so disorienting. We suffer from mental whiplash. Every day is a gob smack.

Our country is based on racism (slavery) and theft (from Indians) as well as the very radical ideas of freedom and the pursuit of happiness. It is hard to see the good things about our country right now. But the Women’s March, the protests against the Muslim Ban, the work people are doing to help immigrants and the recent and very interesting elections in Virginia and other places do give me hope.

Q: In 2010, you told Bill Moyers, “Native Americans put their deepest trust in the United States government . . . There’s an incredible relationship . . . a heart-to-heart feeling about the government that we are nation-to-nation with you.” In Future Home, Native Americans are the main source of resistance. Do you feel that “incredible relationship” is in danger of being sundered?

A: It does astound me to see the flags come out at powwows, and the veterans dancing. But alongside the American flag are the flags of Tribal First Nations. I wanted to shed some light on the history of native service in the military—far above the national average. Native Americans have a treaty relationship with the United States, so it is nation-to-nation. But native people have no illusions about the government either—this is not a naïve embrace of whatever the U.S. government does.

The Department of the Interior and the Bureau of Indian Affairs have made outrageously harmful decisions about resource extraction on native lands, for instance, allowing billions of gallons of pristine fossil water beneath the Hopi Nation to be mixed with coal into a slurry that powers Colorado River water to Phoenix, or in the case of Three Affiliated Tribes’ lands and Standing Rock, damming the Missouri River and depriving tribal people of their food-producing land, their homes, communities, ultimately self-sufficiency.

Q: In a May 2016 interview with The Rumpus, you mentioned, “Now we have women . . . all these fantastic writers, who have managed to have their children but continue with their art, their work. I think women are doing the most interesting writing right now, the most interesting art. I see everything through this lens, of women finally taking their place in the world.” Although you have depicted the subjugation of women in your book, do you still have the same sense of optimism and possibility?

A: Yes, I am optimistic about women, all of us, but that doesn’t mean we can take for granted our rights. Reproductive rights are crucial, and fragile.  In the U.S. right now they [are] under assault—one of the many ways in which things are going backward. Every time we gain ground, there is backlash. Female autonomy frightens some people. I don’t understand exactly why strong women are so frightening that we have to be immediately controlled. It is an atavistic impulse that is very hard to dispel.  Photos of dark-suited men clustered around a dark-suited man signing a bill limiting abortion—that’s dystopic. We have a lot of those photos lately. What dispirits me, infuriates me, is the use to which other women are put—women helping men control women. That’s why I have a creepy video villain, Mother, in the book. She is based on Karen Pence, wife of our vice-president. His (and her) record against gay people, against women, against health care, is filled with craven hatred. He was the failing governor of Indiana who got plucked up by Trump because “he looked like a vice-president.” That’s what we’re dealing with.