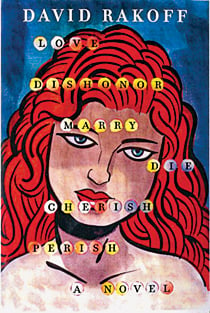 Rakoff, a Canadian-born essayist who became famous first as a contributor on the public radio show This American Life, spent most of his adult years coping with the idea of his own mortality. Rakoff was 22 when he was first diagnosed with cancer. He died last year, at 47, from a recurrence of the disease. In between, he produced a body of hilarious, often mordant, but always joyful work for radio and print. In essays, monologues and skits for, among others, The New York Times and the CBC’s Wiretap, he honed a mischievous, unmistakable voice. In the early years of This American Life, it was that voice, as much as any other, that defined the show.

Love, Dishonor, Marry, Die, Cherish, Perish was both Rakoff’s final work and first novel. He finished the manuscript weeks before his death and died just days after recording the audiobook version. Written entirely in verse—in anapestic tetrameter, to be exact—it follows a series of loosely linked characters through 20th-century America, from turn-of-the-century Chicago to San Francisco during the AIDS crisis and Manhattan today. Like most of Rakoff’s work it is both dark and incredibly humane. The characters suffer through incest, paralysis, abandonment, betrayal and death. But in Rakoff’s hands, the whole thing still comes off as comedic. His language, winking and deft, allows for both deep empathy and dick jokes; it’s a remarkably likeable combination.

Illustrated by the Canadian cartoonist Seth, Love, Dishonor, Marry, Die, Cherish, Perish is a beautiful hardcover book. It is not Rakoff’s masterpiece. His final essay collection, Half Empty, published in 2010, is a bigger, more complete work. But it is a lovely artifact of a beloved writer, one whose winking charm is already greatly missed.